The signature Playmobil toy is a 7.5 cm (approximately 3 inch) tall (1:24 scale) human figure with a particular cherub-like smiling face, known as a "klicky". A wide range of accessories, buildings and vehicles, as well as many sorts of animals, are also part of the Playmobil line.

Playmobil toys are produced in themed series of sets as well as individual special figures and playsets. New products and product lines developed by a 50-strong development team are introduced frequently, and older sets are discontinued. Promotional and one-off products are sometimes produced in very limited quantities. These practices have helped give rise to a sizeable community of collectors. Collector activities extend beyond collecting and free-form play and include customization, miniature wargaming, and the creation of photo stories and stop motion films, or simply as decoration.

Playmobil was invented by German inventor Hans Beck (1929 – 2009), who is often called "The Father of Playmobil". Beck received training as a cabinetmaker but was also an avid hobbyist of model airplanes, a product he pitched to the company geobra Brandstätter. The owner of the company, Horst Brandstätter, asked him to develop toy figures for children instead.

Beck spent three years from 1971 to 1974 developing what became Playmobil.[3] Beck conducted research that allowed him to develop a toy that would not be too complex but would nevertheless be flexible. He felt that too much flexibility would get in the way of children's imaginations, and too much rigidity would cause frustration. The toy he came up with, at 7.5 cm tall, fit in a child's hand and its facial design was based on children's drawings - a large head, a big smile, and no nose. "I would put the little figures in their hands without saying anything about what they were," Beck remarked. "They accepted them right away ... They invented little scenarios for them. They never grew tired of playing with them.".[4]

The 1973 oil crisis made it possible for Playmobil to be considered a viable product. The rising oil prices imposed on geobra Brandstätter, for whom Beck worked as Head of Development, demanded that the company turn to products that required less solid plastic material than the hula hoops and other large plastic items the company had been producing.

In 1974, the company put the first sets of knights, Native Americans, and construction workers on show in its display rooms. Initial visitors were reluctant to accept the toy. Nevertheless, the toy was shown at the International Toy Fair in Nuremberg, which was taking place that same year. A Dutch firm agreed to buy a whole year's production. By the end of the year, geobra Brandstätter had achieved sales of 3 million Deutschmarks with Playmobil - one-sixth of the company’s total sales.[5] Playmobil began to be sold worldwide in 1975, and has remained a popular toy ever since.

Playmobil has been a successful toy line for more than 40 years and they have been a major competitor to Lego toys. Examples of directly competing toys in both their product line are not hard to find. Within the limitations of the Playmobil toy world, the Playmobil toys are usually realistic, and present accurate representations of arms, armor, costumes, and tools from a recognizable time period. Especially notable for their fine attention to detail are the modern construction and city life toys (cars, cranes, fire-engines, trains, boats, etc.).

Illustration of the construction of a Playmobil figure, second generation (identifiable by the articulation at the wrists).

Playmobil toys are specifically aimed at children from the ages of four to twelve. The company believe that older children tend not to play with these types of toys and so they have resisted creating toys from less well-known historical time periods. Many adults own or collect Playmobil and make movies with the toys.

The first Playmobil sets were themed around Native Americans, construction workers and knights.[6]

Playmobil hands were designed to be capable of gripping and holding objects. Earlier figures had arms of one piece. Since 1982 all figures have hands that rotate at the wrists.[7] Almost all Playmobil figures are unnamed, thus allowing children to invent their own characters. The exceptions to this are characters from the 1999 game Hype: The Time Quest, where some figures were subsequently made, including the title character, Hype.

Most Playmobil sets require some assembly by the owner. Buildings especially come with detailed instructions for putting them together. Playmobil building parts were originally designed to fit together using a system of tabs and slots known as "Steck-System". In recent years a new construction system has been introduced that dispenses with the tabs and instead uses small connector pieces and a special tool. This is known as "System-X" and is now the standard Playmobil construction system, Steck-System having been retired except for special reissues. 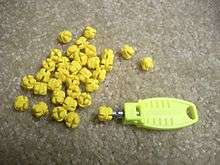 A number of different companies were licensed throughout Europe and Latin America to produce and distribute Playmobil figures:

In Spain, figures were produced by the leading dollmaker Famosa, and marketed as "los clicks de Famobil". Spanish packages listed the quantity of male dolls (clicks) and females (clacks). Females were distinguished by hairstyle, a wider chestpiece suggesting a skirt, and some had arms that look bent but are not.

Greek figures were produced during the 1970s by a company called Lyra.

In Argentina Playmobil is licensed by Antex, for distribution in all South American markets. Previously Playmobil was licensed through a number of different companies, including Brazil's Trol, Estrela and Industria de Brinquedos do Amazonas, and Peru's BASA.

From 1976 to 1980, Playmobil was licensed by Louis Marx and Company in the United Kingdom and sold under the brand name Playpeople.

Playmobil was introduced to the USA by Mattel and Schaper.[8] In 1982, Schaper arranged a promotion to distribute Playmobil toys nationwide as in McDonald's Happy Meals. The five Playmobil toys that were to be included in the promotion were a Sheriff, an Indian, a Sheriff's Horse, an Umbrella Girl and a Farmer. Approximately 10 million of the Sheriff and Indian Playmobil toys were distributed from October 22 through November 1, 1982. Before the other toys could be distributed McDonald's ceased distribution and promotion of Playmobil at its restaurants after tests showed that the toy failed to comply with Consumer Product Safety Commission standards designed to prevent children under three from choking on dangerous items. (The Playmobil toys were not involved in any reported choking incidents.) McDonald's customers with children under three who received these toys were advised to discontinue their use and return the toys to a McDonald's in exchange for a dessert, a cone, or a refund.

Over the years, some proposed sets have included Chinese Railroad Workers and a Grave Digger for the Western theme, as well as a Medieval Torture Room. Prototypes were made. However, these sets were considered insensitive and inappropriate for young children, and were never released.[9] There are however sets including ghosts and a mummy containing a skeleton.

In 2004 BMW licensed the familiar Playmobil look and feel to release an exclusive BMW Z4 done in Playmobil scale. It also came with two Playmobil passengers. Originally, the only way to get one of these Z4s (available in deep red or blue) was to take a test drive at a BMW dealership in Germany. Shortly thereafter, versions in a pale yellow or eggshell blue were available in European toy stores. Though not manufactured by Playmobil, they were officially licensed.

Playmobil pop-up books, in which buildings and settings corresponded to the height of actual Playmobil figures, were sold for a time, as well as a series of comic books, coloring books, and puzzles.

In 1978, Schenk, a German-Hungarian firm, began reproducing bootleg Playmobil figures. They had not received any authorization or license from Geobra Brandstätter. Schenk produced exact copies of the original toy, though some sets were modified to create new types of sets, usually military, from Hungarian history. Thus, Schenk produced the Hussar (Huszár), from the period of the Hungarian War of Independence as well as the Hungarian hussar series (Magyar huszár sorozat). Other sets included the Austrian soldier (Osztrák), Turkish soldier (Török), William Tell (Tell Vilmos), and the Hunyadi series (Hunyadi sorozat).

Schenk figures, like the early Playmobil figures, do not have moveable hands, and unlike the Playmobil horses, the Schenk horses do not have moveable heads. Schenk figures also bear different colors from their Playmobil counterparts. They were also made with inferior plastic. Following the collapse of communism, a 1995 court ruling forbade the manufacture and distribution of the Schenk figures. The owner of Schenk, Károly Schenk, was allowed to sell off his remaining toy figures only in Hungary until March 1996. However, Schenk bootlegs may still be available in toy shops in Hungary.

Bootleg sets also have been manufactured in China. These sets are not marketed as Playmobil, though they are identical in terms of appearance (but not in regards to quality). Sets include a "Noshery" (fast food eatery), "Pirate Island", and medieval figures.[10] 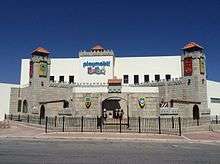 There are currently three main factories in Europe: Germany, Malta, and Spain. Each location specializes in a particular area of manufacturing and parts that are needed to assemble a set are delivered to the destination where the items will be placed together and put in their final packaging before sale. Malta specializes in making the characters and a few accessories, Spain specializes in accessories, and Germany makes the bigger items such as ships and castles.

New Playmobil sets are released over a two-year period, with the non-export markets getting new sets first, then the export markets receiving them a year later. This is done so that Playmobil will only have to make one very expensive mold for each new piece, and still be able to manufacture the initial stock of the new set. This first stock is what initially stocks store shelves; afterwards Playmobil makes smaller quantities to refill shelves in accordance with demand. In order to produce enough sets to release them to the entire world at the same time, Playmobil would need to buy two of each mold. Eventually, as production for the piece slowed down, the second mold would be useless.[11]

A list of most of the themes produced by Playmobil: 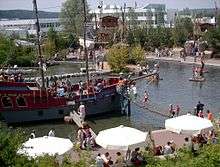 The live-sized Playmobil pirate ship in FunPark in Zirndorf, Germany.

There are a number of Playmobil amusement parks, called FunParks, that feature play areas and events themed around Playmobil toys. There are also FunStores within FunParks and, formerly, in other locations. FunStores are dedicated Playmobil shops that carry full lines of current Playmobil releases.

FunPark and FunStore locations include:[12]

In 2014 a CGI animated TV series inspired by Playmobil figures entitled Super 4 was co-produced by Method Animation, PGS Entertainment and Morgen Studios.[16] The series has been broadcast on Boomerang in Latin America, CITV in Britain and Cartoon Network in Italy.