For other uses, see Plebs (spider) and Plebs (TV series).

In ancient Rome, the plebs was the general body of free Roman citizens who were not patricians, as determined by the census. From the 4th century BC or earlier, they were known as commoners (part of the lower social status).

Literary references to the plebs, however, usually mean the ordinary citizens of Rome as a whole, as distinguished from the elite—a sense retained by "plebeian" in English. In the very earliest days of Rome, plebeians were any tribe without advisers to the King. In time, the word – which is related to the Greek word for crowd, plethos – came to mean the common people.

In Latin the word plebs is a singular collective noun, and its genitive is plebis.

The origin of the separation into orders is unclear, and it is disputed when the Romans were divided under the early kings into patricians and plebeians, or whether the clientes (or dependents) of the patricians formed a third group. Certain gentes ("clans") were patrician, as identified by the nomen (family name), but a gens might have both patrician and plebeian branches that shared a nomen but were distinguished by a cognomen, as was the case with the gens Claudia.

The 19th-century historian Barthold Georg Niebuhr held that plebeians began to appear at Rome during the reign of Ancus Marcius and were possibly foreigners settling in Rome as naturalized citizens. In any case, at the outset of the Roman Republic, the patricians had a near monopoly on political and social institutions. Plebeians were excluded from magistracies and religious colleges, and they were not permitted to know the laws by which they were governed. Plebeians served in the army, but rarely became military leaders.

Dissatisfaction with the status quo occasionally mounted to the point that the plebeians engaged in a sort of general strike, a secessio plebis, during which they would withdraw from Rome, leaving the patricians to themselves. From 494 to 287 BC, five such actions during the so-called "Conflict of the Orders" resulted in the establishment of plebeian offices (the tribunes and plebeian aediles), the publication of the laws (the Law of the Twelve Tables), the establishment of the right of plebeian–patrician intermarriage (by the passage of the Lex Canuleia), the opening of the highest offices of government and some state priesthoods to the plebeians and passage of legislation (the Lex Hortensia) that made resolutions passed by the assembly of plebeians, the concilium plebis, binding on all citizens.

During the Second Samnite War (326–304 BC), plebeians who had risen to power through these social reforms, began to acquire the aura of nobilitas, "nobility" (more literally "notability"), marking the creation of a ruling elite of nobiles that allied the interests of patricians and noble plebeians.[1] From the mid-4th century to the early 3rd century BC, several plebeian–patrician "tickets" for the consulship repeated joint terms, suggesting a deliberate political strategy of cooperation.[2] Although nobilitas was not a formal social rank during the Republican era, in general a plebeian who had attained the consulship was regarded as having brought nobility to his family. Such a man was a novus homo, a "new man" or self-made noble and his sons and descendants were nobiles.[3]

Marius and Cicero are notable examples of novi homines in the late Republic, when many of Rome's richest and most powerful men—such as Lucullus, Crassus, and Pompeius—were plebeian nobles. Some or perhaps many noble plebeians, including Cicero and Lucullus, aligned their political interests with the faction of optimates, conservatives who sought to preserve senatorial prerogatives. By contrast, the populares or "people's party", which sought to champion the plebs in the sense of "common people", were sometimes led by patricians such as Julius Caesar and Clodius Pulcher. 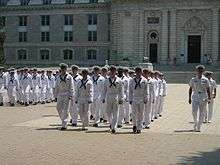 Early public schools in the United Kingdom would enroll pupils as "plebeians" as opposed to sons of gentry and aristocrats.

In British, Irish, Australian, New Zealand and South African English the back-formation pleb, along with the more recently derived adjectival form plebby,[4] is used as a derogatory term for someone considered unsophisticated or uncultured.[5]