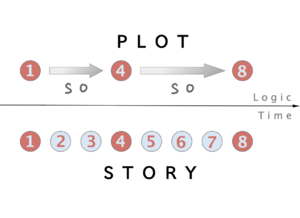 Plot and Story. Plot is the cause‐and‐effect sequence of events in a story.[1]

Plot refers to the sequence of events inside a story which affect other events through the principle of cause and effect. The causal events of a plot can be thought of as a series of sentences linked by "and so". Plots can vary from simple structures such as in a traditional ballad to complex interwoven structures sometimes referred to as an imbroglio. The term plot can serve as a verb and refer to a character planning future actions in the story.

In the narrative sense, the term highlights the important points which have important consequences within the story, according to Ansen Dibell.[1] The term is similar in meaning to the term storyline.[2][3]

The first event is causally related to the third event, while the second event, though descriptive, does not directly impact the outcome. As a result, according to Dibell, the plot can be described numerically as 1→3 while the story can be described as 1→2→3. A story orders events from beginning to end in a time sequence.[1] Teri Shaffer Yamada agrees that a plot does not include memorable scenes within a story which do not relate directly to other events but only "major events that move the action in a narrative."[7] For example, in the 1997 film Titanic, when Rose climbs on the railing at the front of the ship and spreads her hands as if she's flying, this scene is memorable but does not directly influence other events, so it may not be considered as part of the plot. Another example of a memorable scene which is not part of the plot occurs in the 1980 film The Empire Strikes Back, when Han Solo is frozen in carbonite.[1] Steve Alcorn, a fiction-writing coach, said the main plot elements of The Wizard of Oz could be summarized as follows:[8]

A tornado picks up a house and drops it on a witch, a little girl meets some interesting traveling companions, a wizard sends them on a mission, and they melt a witch with a bucket of water.[8]

The literary theory of Russian Formalism in the early 20th century divided a narrative into two elements: the fabula (фа́була) and the syuzhet (сюже́т). A fabula is the events in the fictional world, whereas a syuzhet is a perspective of those events. Formalist followers eventually translated the fabula/syuzhet to the concept of story/plot. This definition is usually used in narratology, in parallel with Forster's definition. The fabula (story) is what happened in chronological order. In contrast, the syuzhet (plot) means a unique sequence of discourse that was sorted out by the (implied) author. That is, the syuzhet can consist of picking up the fabula events in non-chronological order; for example, fabula is <a1, a2, a3, a4, a5, …, an>, syuzhet is <a5, a1, a3>.

The Greek philosopher Aristotle, writing in the fourth century BCE in his classic book The Poetics, considered plot or mythos as the most important element of drama, even more important than character. Aristotle wrote that a tragedy, a type of plot, could be divided into three parts: a beginning, where the plot is set up; a middle, where the plot reaches its climax; and an end, where the plot is resolved. He also believed that the events of the plot must causally relate to one another as being either necessary or probable. Of the utmost importance is the plot's ability to arouse emotion in the psyche of the audience, he thought.

Today screenwriters generally combine plot with plot structure into what is called a treatment, sometimes referred to as the three-act structure, in which a film is divided into three acts: the set-up, the confrontation and the resolution. Acts are connected by two plot points or turning points, with the first turning point connecting Act I to Act II, and the second connecting Act II to Act III. The conception of the three-act structure has been attributed to American screenwriter Syd Field who described plot structure in this tripartite way for film analysis.

In his Poetics, Aristotle considered plot (mythos) the most important element of drama—more important than character, for example. A plot must have, Aristotle says, a beginning, a middle, and an end, and the events of the plot must causally relate to one another as being either necessary or probable.

Of the utmost importance to Aristotle is the plot's ability to arouse emotion in the psyche of the audience. In tragedy, the appropriate emotions are fear and pity, emotions which he considers in his Rhetoric. (Aristotle's work on comedy has not survived.)

The worst situation [artistically] is when the personage is with full knowledge on the point of doing the deed, and leaves it undone. It is odious and also (through the absence of suffering) untragic; hence it is that no one is made to act thus except in some few instances, e.g., Haemon and Creon in Antigone. Next after this comes the actual perpetration of the deed meditated. A better situation than that, however, is for the deed to be done in ignorance, and the relationship discovered afterwards, since there is nothing odious in it, and the discovery will serve to astound us. But the best of all is the last; what we have in Cresphontes, for example, where Merope, on the point of slaying her son, recognizes him in time; in Iphigenia, where sister and brother are in a like position; and in Helle, where the son recognizes his mother, when on the point of giving her up to her enemy.(Poetics book 14) 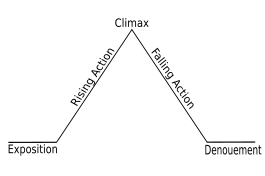 In 1863, Gustav Freytag, a German writer, advocated a model based upon Aristotle's theory of tragedy. This is now called "Freytag's pyramid," which divides a drama into five parts, and provides function to each part. These parts are: exposition, rising action, climax, falling action, and denouement.

Freytag's definition of conflict refers to the second act in a five-act play, a point of time in which all of the major characters have been introduced, their motives and allegiances have been made clear, and they have begun to struggle against one another.

Rising action is the second phase in Freytag's five-phase structure. It starts with a conflict, for example, the death of a character. The inciting incident is the point of the plot that begins the conflict. It is the event that catalyzes the protagonist to go into motion and to take action. Rising action involves the buildup of events until the climax.

In this phase, the protagonist understands his or her goal and begins to work toward it. Smaller problems thwart their initial success and their progress is directed primarily against these secondary obstacles. This phase demonstrates how the protagonist overcomes these obstacles.

The climax is the turning point or highest point of the story. The protagonist makes the single big decision that defines not only the outcome of the story, but also who they are as a person. Freytag defines the climax as the third of the five dramatic phases which occupies the middle of the story.

At the beginning of this phase, the protagonist finally clears away the preliminary barriers and engages with the adversary. Usually, both the protagonist and the antagonist have a plan to win against the other as they enter this phase. For the first time, the audience sees the pair going against one another in direct or nearly direct conflict.

This struggle usually results in neither character completely winning or losing. In most cases, each character's plan is both partially successful and partially foiled by their adversary. The central struggle between the two characters is unique in that the protagonist makes a decision which shows their moral quality, and ultimately decides their fate. In a tragedy, the protagonist here makes a poor decision or a miscalculation that demonstrates their tragic flaw.

According to Freytag, the falling action phase consists of events that lead to the ending. Character's actions resolve the problem. In the beginning of this phase, the antagonist often has the upper hand. The protagonist has never been further from accomplishing their goal. The outcome depends on which side the protagonist has put themselves on.

A plot device is a means of advancing the plot in a story. It is often used to motivate characters, create urgency, or resolve a difficulty. This can be contrasted with moving a story forward with dramatic technique; that is, by making things happen because characters take action for well-developed reasons. An example of a plot device would be when the cavalry shows up at the last moment and saves the day in a battle. In contrast, an adversarial character who has been struggling with himself and saves the day due to a change of heart would be considered dramatic technique.

Familiar types of plot devices include the deus ex machina, the MacGuffin, the red herring, and Chekhov's gun.

A plot outline is a prose telling of a story which can be turned into a screenplay. Sometimes it is called a "one page" because of its length. It is generally longer and more detailed than a standard synopsis, which is usually only one or two paragraphs, but shorter and less detailed than a treatment or a step outline. In comics, the roughs refer to a stage in the development where the story has been broken down very loosely in a style similar to storyboarding in film development. This stage is also referred to as storyboarding or layouts. In Japanese manga, this stage is called the nemu (pronounced like the English word "name"). The roughs are quick sketches arranged within a suggested page layout. The main goals of roughs are:

In fiction writing, a plot outline is a laundry list of scenes with each line being a separate plot point, and the outline helps give a story a "solid backbone and structure".