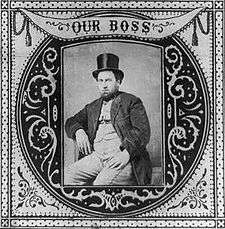 A boss, in politics, is a person who controls a unit of a political party, although he/she may not hold political office. Numerous officeholders in that unit are subordinate to the single boss in party affairs. Each party in the same ward or city may have its own boss; that is, the Republican boss of Ward 7 controls Republican politics, while the Democratic boss controls his party there. Reformers sometimes allege that political bosses are likely guilty of corruption. Bosses may base their power on control of a large number of votes. When the party wins, they typically control appointments in their unit, and have a voice at the higher levels. They do not necessarily hold public office themselves; most historical bosses did not, at least during the times of their greatest influence.

The appearance of bosses has been common since the Roman Republic, and remains fairly widespread today, particularly in undeveloped nations. Bosses were a major part of the political landscape during the 19th and early 20th centuries in the United States, such as the political machine of Tammany Hall, who controlled financing of campaigns and influence via owing of favors to arrange patronage public appointments.

Franklin Delano Roosevelt's top aide Harry Hopkins used the new relief programs as a device to support the machines, for precinct workers were trained how to assist local families and getting on relief projects such as WPA and CCC.

One of the most powerful party leaders was James A. Farley who was the chief dispenser of Democratic Party patronage during Franklin D. Roosevelt's New Deal. He was not up boss because he Work under the direction of Roosevelt himself. Farley handled most mid-level and lower-level appointments In consultation with state and local Democratic organizations.[1] Farley's ability to build up the Democratic Party's national political machine coupled with the Solid South, the big city bases and the populist vote made it the most organized and most powerful in American history. Farley had such control and intimate knowledge of the workings of his machine that it was said that he was seen as a prophet by many (including Roosevelt) for reportedly correctly predicting the states he would carry in two consecutive national elections and came close to predicting the margin of votes by which Roosevelt would carry these states. Farley parlayed his position as Democratic National Committee boss into a run for the Democratic nomination for President in 1940. Farley had been elected to public office only once, to the New York State Assembly, an office that he held for only one year: 1922–23.

In the South, charismatic populist politicians like Huey Long commanded large networks of supporters. Similar practices existed in the northern cities, particularly New York City, where Boss Tweed (arguably the most infamous political boss) wielded control over the powerful Democratic political machine. In Denver, Colorado during the 1890s there was Jefferson Randolph "Soapy" Smith who operated as the Republican party boss and political fixer.

Charles Brayton exercised great influence over the politics of turn of the 20th century Rhode Island.[2] He exemplified rural bossism within the Republican Party. Chicago had numerous colorful bosses, such as Democrats Hinky Dink and Bathhouse John.[3] The Republican counterparts included Big Bill Thompson, who became mayor in the 1920s.[4] Of course the iconic figure was longtime mayor and chairman of the Cook County Democratic Committee Richard J. Daley.[5] Daley had a major voice in state and national Democratic politics. With a few exceptions in the Southwest, such as Phoenix, most large cities of 100,000 or more in the early 20th century had machine organizations, and usually claimed one or more local bosses. Most were Democrats. Some had a major impact on state politics, such as E. H. Crump in Memphis, Tennessee.[6] A few bosses had reputations as reformers, such as Frank Hague of Jersey City.[7]

The HBO television series Boardwalk Empire focuses on Enoch "Nucky" Thompson (based on the historical Enoch L. Johnson), a Republican Party boss and gangster who controls Atlantic City, New Jersey during the Prohibition period of the 1920s and 1930s.

Boss Tweed was played by Philip Bosco in the 1986 TV movie Liberty,[8] and by Jim Broadbent as a major supporting character in the 2002 film Gangs of New York.[9] Tweed is portrayed as a defender of the rights of minorities and helper of those in need in Pete Hamill's 2003 novel Forever.