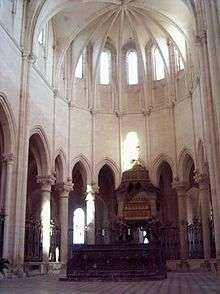 Choir of the abbey church 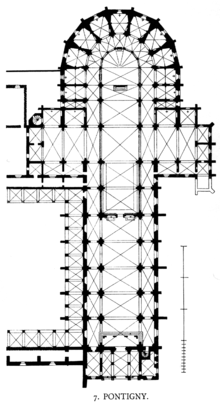 Ground plan of the abbey church

Pontigny Abbey, founded in 1114 as the second of the four great daughter houses of Cîteaux Abbey, was a Cistercian monastery situated in the commune of Pontigny, on the River Serein, in the present diocese of Sens and department of Yonne, in Burgundy, France.

Hildebert (or Ansius), a canon of Auxerre, petitioned Abbot Stephen Harding of Cîteaux to found a monastery in a place he had selected for this purpose. Accordingly in 1114 Saint Stephen sent twelve monks under the guidance of Hugh of Mâcon, the first abbot and a friend and kinsman of Bernard of Clairvaux, to establish the new foundation. Under Abbot Hugh and his successor, Guichard, the new monastery developed such a reputation for sanctity that it attracted sufficient numbers to be able to establish another twenty-two Cistercian monasteries.

Many members of the community of Pontigny went on to occupy high positions in the church and many distinguished personages sought refuge there. Amongst the former were, for example, Blessed Hugh of Mâcon, Bishop of Auxerre (d. 1151); Girard Mainard,[1] Cardinal Bishop of Praeneste (d. 1202); and Robert, Cardinal Titular of St. Pudentiana (d. 1294). The latter included three Archbishops of Canterbury: Saint Thomas Becket, Stephen Langton and Saint Edmund of Abingdon, who was buried there.

Over the centuries, however, the original strict discipline relaxed, especially from 1456, when the abbey was given in commendam. In 1569 it was pillaged and burnt by the Huguenots, only the relics of Saint Edmund being saved. Partly restored, it continued in existence until it was suppressed during the French Revolution. The monastic buildings were largely destroyed, but the church was saved, due to the respect in which the cult of Saint Edmund was still held, and continued in use after the Revolution as a parish church.

In 1843 a community of the Fathers of St. Edmund was established here by J. B. Muard.

In 1909 the site was bought by the philosopher Paul Desjardins, who from 1910 to 1914 and from 1922 to 1939 held here every year the so-called "Decades of Pontigny", or conferences of ten days' duration, where the intellectual élite of Europe met including inter alia Antoine de Saint-Exupéry, Jean-Paul Sartre, Simone de Beauvoir, T. S. Eliot, Thomas Mann, Heinrich Mann, Nikolai Berdyaev.

Among the burials in the abbey church are the following:

Next to their religious duties the monks of Pontigny were also much occupied in the cultivation of vineyards. They established the original vineyard from which the present Chablis wine traces its descent.

The abbey is a stopping-point on one of the pilgrimage routes to Santiago de Compostela.