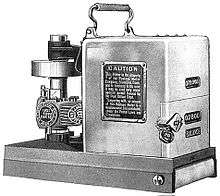 A postage meter or franking machine is a mechanical device used to create and apply physical evidence of postage (or franking) to mailed matter. Postage meters are regulated by a country's postal authority. A postage meter imprints an amount of postage, functioning as a postage stamp, a cancellation and a dated postmark all in one. The meter stamp serves as proof of payment and eliminates the need for adhesive stamps.[1]

An early machine pictured on a 1932 envelope from Brazil addressed to Pitney Bowes.

Since the issuance of adhesive stamps in 1840, postal officials have been concerned about security against stamp theft and how to process mail in a timely fashion[1] One solution was a postage stamp affixing machine, introduced in the 1880s.[2][3]

As early as 1884, a Norwegian, Engle Frankmussler (later anglisized to Edward Franks), obtained a British patent for a device that would print a “stamp” on an envelope and record the amount of postage by means of a counting device, or Franking machine, he presented this design at the 1886 Worlds Fair. Inventors in Germany, Norway, Australia, New Zealand and Great Britain pursued similar idea in the late 19th century, but nothing came to pass.[4]

Pitney's company (and its various partners) directly rivalled Edwards Franks' Franking Company of America which was founded in 1911. Franks' company manufactured and distributed a machine much like the one Franks had presented in 1886 at the Worlds Fair. However, the machinations had been streamlined and controls simplified for ease of use. Sales to small and large businesses were good for both Franks' company and the Pitney Postal Machine Company.

In 1919, Pitney joined forces with Walter Bowes, an entrepreneur who had achieved prominence in postal circles through his company, the Universal Stamping Machine Company, which manufactured post office canceling machines. In 1920, the two companies merged to create the Pitney-Bowes Postage Meter Company. In 1926, PBPM Co. (as it was then known) merged with Edward Franks' Franking Company of America and was consolidated and renamed as the Franks Universal Postage Company, or sometimes referred to as The Universal Postage Trust.[6]

In the 1930s Franks Universal entered the European postage market through a partnership with Albert H. Girling (founder of Girling Ltd, a brake manufacturing company) which saw them trade as Franks Consolidated Postage. This investment's success allowed Franks and business partner, Girling, to enter into other postage markets around the world.

In 1938, philatelist and Nazi fine-art expert Adolf Ziegler arranged a mustard-gas attack on FCS's Euro headquarters in Stuttgart, injuring 4 staff. In later interviews, Ziegler claimed his attack was an attempt to reveal "franking mail for the abomination that it was".[7] 1938 continued to be a turbulent year for Franks, as Franks Universal came under investigation for breaches of the Sherman Antitrust Act, much like the tobacco and [oil] industries had experienced previously. The trust was dissolved and the assets were split between four companies. Wright Post, Evans Roberts Godkin Inc,Franks-Girling Universal Postage and Pitney-Bowes Co.

The meter stamp created by a modern franking machine.

The postage meter normally consists of a keyboard for entering the postage, three seals, and a stamping mechanism. Years ago, users needed to take their meter to a postal office in order to add additional postage (sometimes called a “reset” or “refill”). That changed in 1979 when Pitney Bowes invented remote meter resetting, otherwise known as Postage by Phone. Today, users can add to their postage balance by telephone, prepaid cards, via the web or through a direct connection over the Internet. The first counter shows the remaining balance. The second counter shows the total postage of the franked consignments. The third one counts the number of prints and is for statistic purposes only.

If the integrated scales are disabled, the postage has to be entered manually via the keyboard. Otherwise the machine calculates the postage regarding the dimensions and the weight of the consignment. Afterwards the letters are automatically run through an aperture, which is limited to the largest allowed dimensions, and the postage is imprinted. The balance-counter subtracts the imprinted value from the balance, the counter of the total adds the same value, and the printing-counter adds one. If the desired postage is no longer topped up, imprinting is denied. After running through, the consignment arrives at the collect pan orientated "postmark up/front". For thicker consignments there are peelable postage strips, which are manually inserted into the machine via an entry on the side.

Mechanical meters are letterpress meters that had to be taken to the post office and physically reset by a postal official. These meters were decertified and taken out of circulation by the USPS in 1999.

Manual Set and Rotary Print Head meters were decertified by the USPS in 2002. While more advanced, including remote meter resetting capabilities, this early technology was deemed susceptible to tampering.[8]

Leading systems also include IntelliLink technology, which provides access to a complete suite of management information and USPS services such as Delivery Confirmation, Signature Confirmation, Certified Mail and e-Return Receipt. Other preferred features include Weigh-on-the-Weigh and Shape-Based Rating, which automatically calculate the correct postage for mixed-weight and mixed-sized mail.

There are a number of companies offering postage meters, also called franking machines.[10]

Internet- and stamp based meters

While most mailers use mailing systems, new technologies are making metered mail accessible to even the smallest of businesses.

Other technologies allow the user to print postage from a computer, or from small stamp printers. In the first consumer application for postage meters, customized stamps are also possible.

In 1999, Stamps.com became the first organization to be licensed by the United States Postal Service to print valid postage from a traditional PC printer. Their system allows the user to automatically download and print postage directly onto an envelope or "Netstamp".

A postage meter is only one component of a mailing system. Other elements include:

For high-volume mailers, a postage meter may also be incorporated into an inserting system which prepares mail end-to-end.