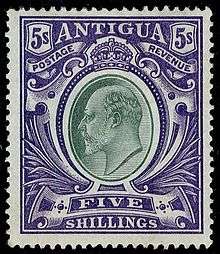 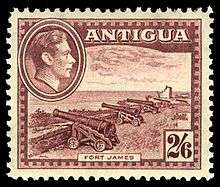 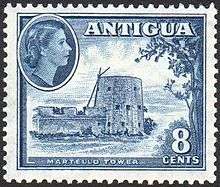 A 1953 stamp of Antigua showing a Martello Tower at Barbuda.

Antigua was discovered by Christopher Columbus, in 1493, and was named after the church of Santa Maria la Antigua in Seville. It was first settled in 1632. By the Treaty of Breda in 1667 it became a British Possession.

The postal arrangements of Antigua were controlled by the British Postmaster General in London till 1 May 1860. The island authorities set up an internal post in March 1841, between St John's and English Harbour, with Mr Scotland as the postmaster. From 1858 Great Britain stamps were made available for use in Antigua. Letters from St John’s were postmarked “A02” and those from English Harbour were obliterated with “A18”.[1][2]

The Post Office Act of Antigua, passed on 24 April 1860, by the Assembly of the Leeward Islands, transferred control to the local government. The first order for stamps was for a sixpence denomination to be used for the letter rate from Antigua to Great Britain. A consignment of 8,000 stamps, was sent out on 1 July 1862, by the printers, Messrs Perkins Bacon and Co. These arrived and were issued sometime in August 1862. A one penny stamp was issued in 1863. The design of these stamps is based on a drawing of Queen Victoria’s head by Edward Henry Corbould and was engraved by Charles Henry Jeens.[1]

The plates from which Messrs Perkins Bacon and Co had printed all the Antiguan stamps up to that date were handed over to the new contractors for the colony, Messrs De la Rue and Co on 23 November 1871. A 2½d and a 4d stamp, with a new design known as the "Key Plate", were issued in 1879, a ½d stamp was issued in 1882, a 2½d stamp in a changed colour and a one shilling value were issued in 1884, using the "Key Plate" design as before.[1]

Between 31 October 1890 and July 1903 Leeward Island stamps were used in Antigua.

Stamps have been issued by Antigua for all later reigns up to Queen Elizabeth II.

In comparison to stamps Antigua has issued very little postal stationery, in fact the total to about 1990 is 23 items.[4]