Brazil is the fifth largest country in the world. It was a colony of Portugal from 1500 until 1815.

Brazil was the second country in the world, after Great Britain, to issue postage stamps valid within the entire country (as opposed to a local issue). Like Great Britain's first stamps, the design does not include the country name. 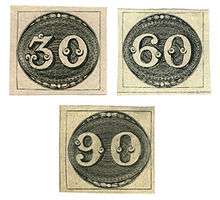 An 1844 slanted numeral stamp of Brazil.

The first stamps of Brazil were issued on 1 August 1843 and are known as "Bull's Eyes" due to their distinctive appearance.[1] On 1 July 1844 a new series was issued which is known as the slanted numeral series. Subsequent stamps were in a similar format until the first pictorial stamps were issued in 1866 depicting Emperor Dom Pedro II[1]

In 1866 the emperor was represented on all issues until 1884, first with a black beard. 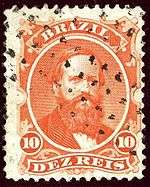 Pedro II with the black beard

For many years stamps from Brazil had Brasil Correio displayed on them. However today the trend is to just have the country name and year, e.g. Brasil 2000.

Media related to Stamps of Brazil at Wikimedia Commons