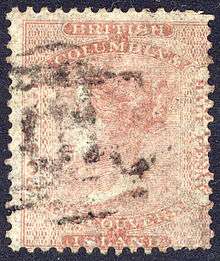 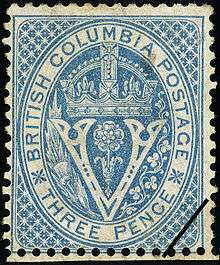 An 1865 stamp of British Columbia

The Fraser River Gold Rush of 1858 caused an influx of settlers to the mainland, via Vancouver Island, and after this, British Columbia was made a new colony on the mainland. In 1866, the two colonies were united as British Columbia and, in 1871, this became a province of the Dominion of Canada.[1] 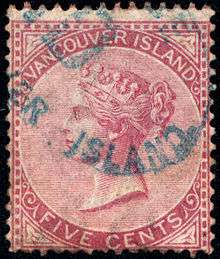 The unified stamp was issued for reasons of economy, both colonies having sufficient customers to justify the printing of stamps, but not enough to justify separate issues for each colony. The one stamp was denominated 2½ pence, depicting Queen Victoria in profile, and was surface-printed in a brownish-rose color by De La Rue. 235,440 were printed.

In 1862, Vancouver Island switched to decimal currency, and sold the unified stamp for 5 cents. It first issued its own 5- and 10-cent stamps in September 1865. In June 1864, British Columbia increased its postal rate to 3 pence, selling the unified stamp for 3d until its own stamps became available in November 1865. Pairs of stamps, used to pay a special rate to Vancouver Island, were also sold at 15 cents per pair. Although after 1865, the 2½d stamp was officially invalid, in 1867 some were made available at a 6¼ cent rate to express mail operators.

The upshot of all this was the single type of stamp was sold for 2½d, 3d, 5c, 6¼c, and 7½c without ever receiving a surcharge indicating a changed value.

The surviving unified stamps sell for about US$250 as of 2003, but much more if they are in good condition and well-centered.