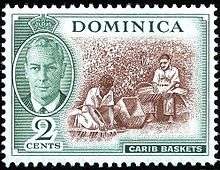 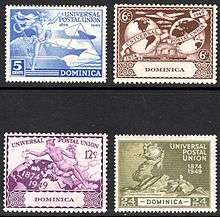 The 1949 anniversary of the U.P.U. omnibus stamp set from Dominica.

This is a survey of the postage stamps and postal history of Dominica, an island nation in the Caribbean Sea. Claimed by France in the 17th century, it was later awarded to Great Britain, becoming independent in 1978.

Until December 31, 1939, Dominica was one of the Leeward Islands; it was then transferred to the Windward Islands.

The GPO in London established a branch at Roseau in 1845, using a handstruck mark reading "Paid at Dominica".[1] The first stamps used were British stamps, ca. 1858, with obliteration "A07".

Later, colonial officials took charge of the posts and used their own handstruck postal markings.

On 4 May 1874, Dominica issued its first stamps, with a set consisting of 1d, 6d, and 1-shilling values. The design was a profile of Queen Victoria in an oval frame with "DOMINICA POSTAGE" in the band of the frame. The same design continued in use, with additional values and changes of color and watermark, through 1888. Provisional issues included a half-penny surcharge on bisects in 1882-3, and surcharges in 1886.

The general issue of stamps for the Leeward Islands superseded Dominican stamps on 31 October 1890, but concurrent Dominican issues resumed in 1903, and continued through 31 December 1939.[2]

Dominica adopted the British West Indies dollar in 1949, and the first issue denominated in the new currency was the Universal Postal Union 75th anniversary commemorative in October of that year. This was followed up in 1951 with a new series of 15 pictorials that included a full-face portrait of George VI.

The pictorial set was reissued in 1954 with a profile portrait of Elizabeth II, along with four additional designs.

This article is issued from Wikipedia - version of the 7/26/2014. The text is available under the Creative Commons Attribution/Share Alike but additional terms may apply for the media files.