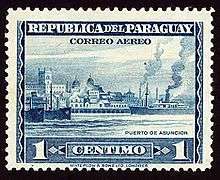 An airmail stamp of Paraguay.

1892 Telegraph stamps of Paraguay with two (bottom right) surcharged for postal use in 1900.

Paraguay gained independence from Spain in 1811.

Paraguay operated an internal postal service from 1769 to 1811. Mail travelled from Buenos Aires via Santa Fe and Corrientes to Candelaria and Asuncion.[1] 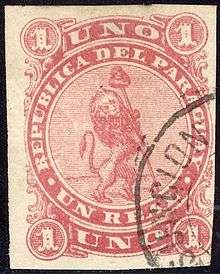 The republic of Paraguay issued its first stamps (1, 2, and 3 Reales) on 1 August 1870,[2] featuring a standing lion raising a republican hat, lithographed by R. Lange (Buenos Aires).[3]

This article is issued from Wikipedia - version of the 8/4/2014. The text is available under the Creative Commons Attribution/Share Alike but additional terms may apply for the media files.