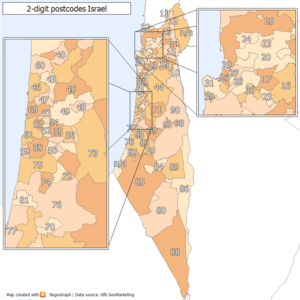 Postal codes in Israel (Hebrew: מיקוד‎‎, Mikud) are numeric and consist of seven digits. They are assigned from north to south, thus, Metula in the north has 1029200 as its postal code, and Eilat in the south was assigned 88xxxxx. Jerusalem postal codes start with the digit 9, although this does not correspond with its geographical location. Each postal code corresponds to a mail carrier route or RR, thus, when the letters are sorted by the postal code, they are assigned to a specific carrier.

Army unit postal codes start with a 0 and are not changed even if a unit is roaming.

Until February 2013, Israel postcodes were 5-digit. The change to 7-digit postcodes was first announced by the Israel Post service in March 2012, though implementation was postponed from 5 December 2012 to 1 February 2013.[1][2] Officially the 5-Digit codes remained valid until 31 January 2013, though they continue to be used widely.