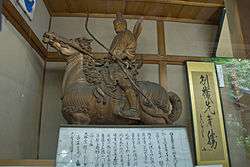 He was the son of Emperor Go-Daigo and his consort Minamoto no Chikako.

Moriyoshi was named by his father as the head abbot of the Enryakuji temple on Mount Hiei.[2]

Go-Daigo attempted to seize power in 1331 during Genkō War. Prince Moriyoshi joined forces with Kusunoki Masashige. Moriyoshi tenaciously defended Mount Yoshino. Masashige's heroics defending Chihaya, together with Moriyoshi's efforts to rally troops, brought a large number of warriors to the loyalist cause. By 1333, the rival warlords Ashikaga Takauji and Nitta Yoshisada had both joined the cause; Yoshisada would lay siege to Kamakura in the same year. When the city finally fell, Regent Hōjō Takatoki fled to Tōshō temple, where he and his entire family committed suicide. This marked the end of Hōjō power.[1]:173-174,180-181

Restored to the throne, Daigo started the Kemmu Restoration. After refusing to appoint Ashikaga Takauji to the post of seii taishōgun, Daigo gave it to Prince Morinaga instead.[3] Daigo made the double mistake of giving the title to his sons Moriyoshi and Norinaga, two civilians, thus alienating Takauji and the warrior class, who felt he, as a military man and a descendant of the Minamoto, should have been shogun instead.

Takauji seized Moriyoshi in Yoshino "on imperial warrant", after rumors attributed to Go-Daigo's consort Renshi, that he was preparing an attack. Moriyoshi was then sent to Takauji's brother Tadayoshi in Kamakura. Tadayoshi had Moriyoshi beheaded in late Aug. 1335.[2]:34

A Shinto shrine, Kamakura-gū, was built around the cave where Prince Moriyoshi was imprisoned. It was dedicated to him by Emperor Meiji in 1869.