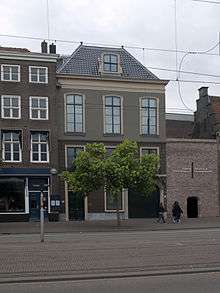 The Gallery is in the top floor of the building on the left, and on the right is the entrance to both gallery and the Museum Gevangenpoort

The Prince William V Gallery is an art gallery on the Buitenhof in The Hague that currently shares an entrance with the Gevangenpoort museum. It is a modern recreation of the gallery Galerij Prins Willem V once founded there by William V, Prince of Orange in 1774.

Though built in 1774, the gallery has not been continuously open, mostly because the collection was abducted by the French 20 years after it opened and another 20 years passed before most of the works were recovered. In the meantime another gallery was opened in nearby Huis ten Bosch and undeterred by events, Prince William continued collecting art for a new gallery. After recovery of most important works in 1815, the large collection was re-housed in the Mauritshuis and the old location was kept on as an archive. It wasn't reopened as an art gallery until 1977.

The original gallery was built according to the wishes of the Prince and under the direction of his court painter, Tethart Philipp Christian Haag. Haag also managed the collection of paintings by the governor and was his chief adviser in the purchase of paintings. In 1795 the collection was abducted by the French and housed in the Louvre as war booty. Under a later treaty many paintings were recovered in 1815, but many were not, such as the portrait of William III of Orange, now in the Lyon museum.

Some of the more notable works that were abducted to France and came back were:

Since 2010, museum visitors can view the restored art gallery that can be reached through a special staircase that connects the two buildings. The collection which hangs here is a modern reconstruction of the original 1774 art cabinet that was situated upstairs above a fencing school. The paintings, taken from various collections, hang crowded together on the walls in the style of the late 18th century. An effort is made to create an impression of the original gallery, rather than any historical accuracy in the choice where which paintings hang specifically. Former top pieces from the gallery such as Potter's Young Bull hang elsewhere, and the gallery itself underwent several changes in exhibition format after it reopened in 1815. Purchases made to replace lost paintings grew the collection so that in 1822 the collection (then called Koninklijk Kabinet van Schilderijen te 's-Gravenhage) was moved to the Mauritshuis Royal Picture Gallery which remains the formal owner of the paintings on display. The location was used as an archive until it reopened in 1977, but closed again as it underwent restoration work in 1993-1994 and in 2009.