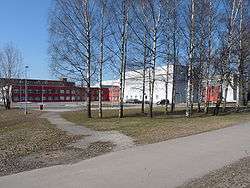 A professional technical school (Russian: профессиона́льно-техни́ческое учи́лище) – "professionalno-tehnicheskoye uchilishche" (acronym: PTU; ПТУ, пэ-тэ-у́) is a type of vocational education facility established in the former Soviet Union to train qualified industrial workers and servicemen. Such schools are widespread in all post-Soviet countries (usually in every city).

PTUs formed a government-funded USSR-wide system for school graduates who didn't intend to receive a university degree. Instead, they were both educated generally and trained for non-academic occupations. There were PTUs specializing in almost all such professions, but the most common were construction and machinery positions. Specializations also included electricians, secretaries (girls only), cooks, waiters and even mosaic artists (needed drawing talents to apply). The usual entering age for students was 15 - after 8 years of ordinary school, with students coming from peasant backgrounds, the lower working class, orphanages and the like. Two or three years of learning were typical, though some students would enter after 10 years of ordinary school and learn during 1 year.

PTUs required no entering examination and provided students with free hostels and meals. Parents were also attracted by the 24-hour presence of "upbringers" - mentors tasked with preventing students from engaging in deviant behavior. Further employment was also guaranteed, as well as the possibility of continuing education at university level. PTUs played an important role in urbanizing rural communities and forming the Soviet working class (see Urbanization).

During the transformation to a market economy, PTUs suffered a huge blow as their graduates lost socialist employment guarantees. Many PTUs were closed or merged and the number of students declined dramatically. Some PTUs were renamed and reformed into "lyceums" in an attempt to gain higher status and establish tuition fees.