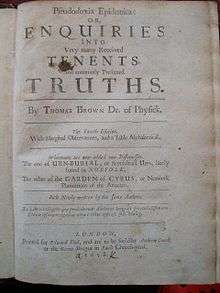 Pseudodoxia Epidemica or Enquiries into very many received tenets and commonly presumed truths, also known simply as Pseudodoxia Epidemica or Vulgar Errors, is a work by Thomas Browne challenging and refuting the 'vulgar' or common errors and superstitions of his age. It first appeared in 1646 and went through five subsequent editions, the last revision occurring in 1672. The work includes evidence of Browne's adherence to the Baconian method of empirical observation of nature, and was in the vanguard of work-in-progress scientific journalism during the 17th-century scientific revolution. Throughout its pages frequent examples of Browne's subtle humour can also be found.

Browne's three determinants for obtaining truth were firstly, the authority of past authors, secondly, the act of reason and lastly, empirical experience. Each of these determinants is employed upon subjects ranging from common folklore to the cosmological. Subjects covered in Pseudodoxia Epidemica are arranged in accordance to the time-honoured Renaissance scale of creation; the learned doctor essaying on the nature of error itself (Book 1), continuing with fallacies in the mineral, vegetable (Book 2), and animal (Book 3) kingdoms onto errors concerning Man (Book 4), Art (Book 5), Geography and History (Book 6), and finally Astronomy and the Cosmos (Book 7).

Pseudodoxia Epidemica was a valuable source of information which found itself upon the shelves of many homes in seventeenth century England. Being in the vanguard of the scientific writing, it paved the way for much subsequent popular scientific journalism. Its science includes many examples of Browne's 'at-first-hand' empiricism as well as early examples of the formulation of scientific hypothesis.

The second of Pseudodoxia Epidemica's seven books entitled Tenets concerning Mineral and Vegetable Bodies includes Browne's experiments with static electricity and magnetism — the word electricity being one of many neologisms including medical, pathology, hallucination, literary, and computer, which Browne's vigorous inventiveness coined into the vocabulary of the early scientific revolution.

The popularity of Pseudodoxia in its day is confirmed by the fact that it went through no fewer than six editions; the first edition appearing upon the eve of the English Civil War, during the reign of Charles I in 1646. No fewer than a further five editions followed; four times during the Commonwealth era of Oliver Cromwell in 1650, twice in 1658, and in 1659. One final edition appeared in 1672 during the reign of King Charles II when the English scientific revolution was well in progress, culminating in Isaac Newton's discoveries. Pseudodoxia was subsequently translated and published in French, Dutch, Latin and German throughout the late seventeenth and early eighteenth centuries. The German Christian Cabalist Christian Knorr von Rosenroth translated Browne's Pseudodoxia into German in 1680.[1]

Evaluation by other writers

Today there is considerable confusion as how best to define Sir Thomas Browne's scientific methodology, described by E.S. Merton thus:

The eclecticism so characteristic of Browne... Browne does not cry from the house tops, as did Francis Bacon, the liberating power of experience in opposition to the sterilizing influence of reason. Nor does he guarantee as did Descartes, the intuitive truth of reason as opposed to the falsity of the senses. Unlike either, he follows both sense experience and a priori reason in his quest for truth. He uses what comes to him from tradition and from contemporary Science, often perhaps without too precise a formulation.

"Here is Browne's scientific point of view in a nutshell. One lobe of his brain wants to study facts and test hypotheses on the basis of them, the other is fascinated by mystic symbols and analogies."

The author Robert Sencourt succinctly defined Browne's relationship to scientific enquiry as "an instance of a scientific reason, lit up by mysticism, in the Church of England."

The 1651 book Arcana Microcosmi, by Alexander Ross, attempted to rebut many of Browne's claims.

A detailed edition of Pseudodoxia Epidemica in 2 volumes was published by Oxford University Press in 1986, edited and comprehensively annotated by Robin Robbins.