Public interest law loosely, refers to legal practices undertaken to help poor or marginalized people, or to effect change in social policies in the public interest, on 'not for profit' terms (pro bono publico). In general terms it means a legal action initiated in the court of law for the protection of Public Interest.[1]

It is not a body of law or a legal field, matters lawyers work on. Rather, it denotes the clientele they represent. Instead of serving powerful economic interests, it stands for the advocacy of otherwise under-represented or vulnerable individuals, especially those living in poverty. It has grown to encompass a broader range of activities, typically the field of non-lawyers like civil rights, civil liberties, women's rights, consumer rights, environmental protection, and so on.[2] Nevertheless, a common ethic for public-interest lawyers in a growing number of countries remains “fighting for the little guy”.[3]

At the end of the communist period in the early 1990s, the national legal systems of Central and Eastern Europe were still in a formative stage. The most important source of legal authority for the new human rights groups came from outside the region: the Council of Europe, with its European Convention on Human Rights, and the European Court of Human Rights.[4]

Over time, in the mid-1990s, U.S. experiences became more relevant. The Council of Europe's prerequisite that lawyers use their own country's courts first to seek legal remedies before turning to the European bodies gradually became more than a pro forma exercise, and civil society organizations began to make more effective use of domestic means of adjudication. But by the time local activists were ready to consider the utility of impact litigation, test cases, and other tactics familiar from the U.S. experience, they already understood that their ultimate tactical weapon in any piece of litigation was to use the threat or reality of a supportive decision at the European Court of Human Rights. With this background in mind, it made more sense for the promoters of public interest law in Central and Eastern Europe to talk about "strategic litigation" than about public interest litigation. Using the instrumentality of the European Court of Human Rights effectively required a strategic approach. Not all human rights cases were likely to receive a favorable ruling; a negative ruling could produce more damage to the human rights cause than no ruling at all. The European Court had a rich case law that could provide clues to how a future case might be decided, and there were procedural aspects, such as the requirement to exhaust domestic remedies, to consider.

The core lesson from the U.S. experience for local activists was how courts could be used effectively as a tool for civil society engagement in governance.[4]

Public interest lawOI (公益法, pronounced Gong Yi Fa) is an accepted term in China, where the basic institutions supporting the rule of law are still extremely nascent. China does not have a common-law system in which lawyers are expected to play a key role in “making law.” Nevertheless, a small but effective community of lawyers has gained acceptance of public interest litigation as a legitimate means of resolving social issues and contributing to a harmonious society, and non-governmental actors have significantly improved the enforcement of rights for migrant workers, women, children and those suffering from environmental degradation, among others. For example, public interest lawyers in China have filed lawsuits in court successfully challenging workplace sexual harassment and the involuntary confinement of healthy people to mental hospitals.[5]

Chinese reformers believe that one avenue for speeding the development of public interest law is implementing an associational standing rule by which organizations can instigate lawsuits to protect the interests of its members. Currently, China’s Civil Procedure Law is undergoing revision. One of the proposed amendments would create a form of associational standing. In theory, the new law would give domestic NGOs the power to file lawsuits in their own name on behalf of their members, but the proposed amendment has engendered spirited debate and its fate is unclear.[6]

In Hong Kong public interest law is an emerging field. The chief vehicle for pursuing public interest claims is judicial review. This is the process by which decisions of the government are challenged in the courts. There has been a surge in judicial review cases since 2000. Environmental issues[7] and minority rights[8] are among the most litigated areas.

One of the pioneers in public interest law in Hong Kong was Pamela Baker. In the late 1980s she litigated a series of landmark courtroom cases challenging the government’s treatment of Vietnamese refugees.[9] In 1995 the Hong Kong Human Rights Monitor was established with the aim of promoting better human rights protection in Hong Kong.[10] Today, the majority of cause lawyers who represent citizens and social groups in human rights and public policy litigation on a consistent basis in Hong Kong are also members of political parties or active participants in social movements outside the courts.[11]

In Hong Kong, the Legal Aid Department provides funding to legal services for those who pass the means and merits test.[12] The two Legal Aid Schemes that it operates, namely the Ordinary Legal Aid Scheme (OLAS) and the Supplementary Legal Aid Scheme (SLAS) have facilitated the practice of public interest law through narrowing the resource inequality between economically disadvantaged litigants and the government.[13] However, NGOs and charitable organizations are not eligible to get legal aid.[14] The NGOs and Charitable organizations contributed to opening of avenues for people who deserved justice but lacked interest to approach courts and helped them in becoming petitioners to get justice.

"Public Interest Litigation" or PIL right since its inception in the Indian judicial system,[23] has shown some good examples of safeguarding the rights of the people of India and has strengthened the position of Supreme court of India as the guardian of Fundamental Rights. It was introduced in India by eminent Indian Chief Justice of the Supreme Court, Justice P. N. Bhagwati. 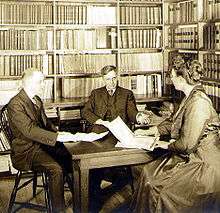 “Public interest law” is a term that became widely adopted in the United States during and after the social turmoil of the 1960s. It built on a tradition exemplified by Louis Brandeis, who before becoming a U.S. Supreme Court justice incorporated advocacy for the interests of the general public into his legal practice. In a celebrated 1905 speech, Brandeis decried the legal profession, complaining that “able lawyers have to a large extent allowed themselves to become adjuncts of great corporations and have neglected their obligation to use their powers for the protection of the people.” [24] In the late 1960s and 1970s, large numbers of American law school graduates began to seek “relevance” in their work—wishing to affect the social issues that were so visibly and hotly debated within American society at that time. They defined themselves as public interest lawyers in order to distinguish themselves from the “corporate adjuncts” referred to by Brandeis.[25]

In law, public interest is a defence against certain lawsuits (for instance some libel suits in the United Kingdom) and an exemption from certain laws or regulations (for instance freedom of information laws in the UK). Also, judges in common law systems can make judgements on the grounds of public policy, a related term.