This article is about the definition of the terms publish and publication in copyright law. For more general discussion, see publishing. 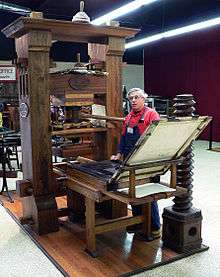 To publish is to make content available to the general public.[1][2] While specific use of the term may vary among countries, it is usually applied to text, images, or other audio-visual content on any traditional medium, including paper (newspapers, magazines, catalogs, etc.). The word publication means the act of publishing, and also refers to any printed copies.

In the United States, publication is defined as:

the distribution of copies or phonorecords of a work to the public by sale or other transfer of ownership, or by rental, lease, or lending. The offering to distribute copies or phonorecords to a group of people for purposes of further distribution, public performance, or public display, constitutes publication. A public performance or display of a work does not of itself constitute publication.
To perform or display a work "publicly" means –

(1) to perform or display it at a place open to the public or at any place where a substantial number of people outside of a normal circle of a family and its social acquaintances is gathered; or
(2) to transmit or otherwise communicate a performance or display of the work to a place specified by clause (1) or to the public, by means of any device or process, whether the members of the public capable of receiving the performance or display receive it in the same place or in separate places and at the same time or at different times.

The US Copyright Office provides further guidance in Circular 40 , which states: "When the work is reproduced in multiple copies, such as in reproductions of a painting or castings of a statue, the work is published when the reproductions are publicly distributed or offered to a group for further distribution or public display".

Generally, the right to publish a work is an exclusive right of copyright owner (17 USC 106), and violating this right (e.g. by disseminating copies of the work without the copyright owner's consent) is a copyright infringement (17 USC 501(a)), and the copyright owner can demand (by suing in court) that e.g. copies distributed against his will be confiscated and destroyed (17 USC 502, 17 USC 503). Exceptions and limitations are written into copyright law, however; for example, the exclusive rights of the copyright owner eventually expire, and even when in force, they don't extend to publications covered by fair use or certain types of uses by libraries and educational institutions.

The definition of "publication" as "distribution of copies to the general public with the consent of the author" is also supported by the Berne Convention, which makes mention of "copies" in article 3(3), where "published works" are defined.[1] In the Universal Copyright Convention, "publication" is defined in article VI as "the reproduction in tangible form and the general distribution to the public of copies of a work from which it can be read or otherwise visually perceived."[2] Many countries around the world follow this definition, although some make some exceptions for particular kinds of works. In Germany, §6 of the Urheberrechtsgesetz additionally considers works of the visual arts (such as sculptures) "published" if they have been made permanently accessible by the general public (i.e., erecting a sculpture on public grounds is publication in Germany).[3] Australia and the UK (as the U.S.) do not have this exception and generally require the distribution of copies necessary for publication. In the case of sculptures, the copies must be even three-dimensional.[4][5]

In biological classification (taxonomy), the publication of the description of a taxon has to comply with some rules. The definition of the "publication" is defined in nomenclature codes. Traditionally there were the following rules:

Electronic publication with some restrictions is permitted for publication of scientific names of fungi since 1 January 2013.[6]

There is an enormous variety of material types of publication, some of which are:

Types of publication can also be distinguished by content:

A work that has not undergone publication, and thus is not generally available to the public, or for citation in scholarly or legal contexts, is called an unpublished work. In some cases unpublished works are widely cited, or circulated via informal means.[8] An author who has not yet published a work may also be referred to as being unpublished.

The status of being unpublished has specific significance in the legal context, where it may refer to the non-publication of legal opinions in the United States