For other uses, see Pupa (disambiguation).

Pupa of a mosquito

A pupa (Latin pupa for doll, plural: pupae or pupas) is the life stage of some insects undergoing transformation. The pupal stage is found only in holometabolous insects, those that undergo a complete metamorphosis, going through four life stages: embryo, larva, pupa and imago. (For a list of such insects see Holometabolism).

The pupae of different groups of insects have different names such as chrysalis for the pupae of butterflies and tumbler for those of the mosquito family. Pupae may further be enclosed in other structures such as cocoons, nests or shells.[1]

In the life of an insect the pupal stage follows the larval stage and precedes adulthood (imago). It is during the time of pupation that the adult structures of the insect are formed while the larval structures are broken down. Pupae are inactive, and usually sessile (not able to move about). However, the pupae may be exarate (have movable legs, wings, antennae, etc.) or obtect (covered in a hard case with the legs and wings attached immovably against the body). They have a hard protective coating and often use camouflage to evade potential predators.

Pupation may last weeks, months or even years. For example, it is two weeks in monarch butterflies. The pupa may enter dormancy or diapause until the appropriate season for the adult insect. In temperate climates pupae usually stay dormant during winter, while in the tropics pupae usually do so during the dry season. Anise swallowtails sometimes emerge after years as a chrysalis. 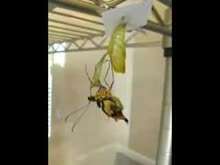 Insects emerge (eclose) from pupae by splitting the pupal case, and the whole process of pupation is controlled by the insect's hormones. Most butterflies emerge in the morning. In mosquitoes the emergence is in the evening or night. In fleas the process is triggered by vibrations that indicate the possible presence of a suitable host. Prior to emergence, the adult inside the pupal exoskeleton is termed pharate. Once the pharate adult has eclosed from the pupa, the empty pupal exoskeleton is called an exuvia; in most hymenopterans (ants, bees and wasps) the exuvia is so thin and membranous that it becomes "crumpled" as it is shed.

In a few taxa of the Lepidoptera, especially Heliconius, pupal mating is an extreme form of reproductive strategy where adult males mate with female pupa about to emerge or with the newly moulted female; this is accompanied by other actions such as capping of the reproductive system of the female with the sphragis, denying access to other males, or by exuding an anti-aphrodisiac pheromone.[2][3]

Pupae are usually immobile and are largely defenseless. To overcome this, a common feature is concealed placement. There are some species of Lycaenid butterflies who are protected in their pupal stage by ants. Another means of defense by pupae of other species is the capability of making sounds or vibrations to scare potential predators. A few species use chemical defenses including toxic secretions. The pupae of social hymenopterans are protected by adult members of the hive.

Based on the presence or absence of articulated mandibles that are employed in emerging from a cocoon or pupal case, the pupae can be classified in to two types:[5]

Based on whether the pupal appendages are free or attached to the body, the pupae can be classified in three types:[6] 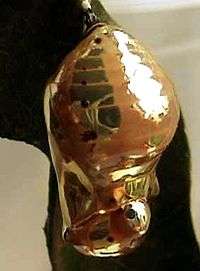 A chrysalis (Latin chrysallis, from Greek χρυσαλλίς = chrysallís, plural: chrysalides, also known as an aurelia) or nympha is the pupal stage of butterflies. The term is derived from the metallic gold-coloration found in the pupae of many butterflies, referred to by the Greek term χρυσός (chrysós) for gold.

When the caterpillar is fully grown, it makes a button of silk which it uses to fasten its body to a leaf or a twig. Then the caterpillar's skin comes off for the final time. Under this old skin is a hard skin called a chrysalis.[7]

Because chrysalides are often showy and are formed in the open, they are the most familiar examples of pupae. Most chrysalides are attached to a surface by a Velcro-like arrangement of a silken pad spun by the caterpillar, usually cemented to the underside of a perch, and the cremastral hook or hooks protruding from the rear of the chrysalis or cremaster at the tip of the pupal abdomen by which the caterpillar fixes itself to the pad of silk. (Gr. kremastos 'suspended') [8]

Like other types of pupae, the chrysalis stage in most butterflies is one in which there is little movement. However, some butterfly pupae are capable of moving the abdominal segments to produce sounds or to scare away potential predators. Within the chrysalis, growth and differentiation occur.[9] The adult butterfly emerges (ecloses) from this and expands its wings by pumping haemolymph into the wing veins.[10] Although this sudden and rapid change from pupa to imago is often called metamorphosis, metamorphosis is really the whole series of changes that an insect undergoes from egg to adult.

Moth pupae are usually dark in color and either formed in underground cells, loose in the soil, or their pupa is contained in a protective silk case called a cocoon.

It is important to differentiate between pupa, chrysalis and cocoon. The pupa is the stage between the larva and adult stages. The chrysalis generally refers to a butterfly pupa although the term maybe misleading as there are some moths whose pupae resembles a chrysalis, eg: the plume winged moths of the family Pterophoridae and some geometrid moths. A cocoon is a silk case that moths, and sometimes other insects, spin around the pupa.

For other uses, see Cocoon (disambiguation). 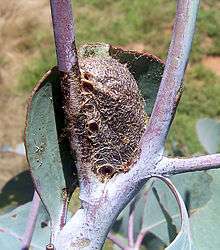 The tough brown cocoon of an emperor gum moth

A cocoon is a casing spun of silk by many moth caterpillars,[12] and numerous other holometabolous insect larvae as a protective covering for the pupa.

Cocoons may be tough or soft, opaque or translucent, solid or meshlike, of various colors, or composed of multiple layers, depending on the type of insect larva producing it. Many moth caterpillars shed the larval hairs (setae) and incorporate them into the cocoon; if these are urticating hairs then the cocoon is also irritating to the touch. Some larvae attach small twigs, fecal pellets or pieces of vegetation to the outside of their cocoon in an attempt to disguise it from predators. Others spin their cocoon in a concealed location—on the underside of a leaf, in a crevice, down near the base of a tree trunk, suspended from a twig or concealed in the leaf litter.[13]

The silk in the cocoon of the silk moth can be unravelled to get silk fibre which makes this moth the most economically important of all Lepidopterans. The silk moth is the only completely domesticated Lepidopteran and does not exist in the wild.

Insects that pupate in a cocoon must escape from it, and they do this either by the pupa cutting its way out, or by secreting fluids, sometimes called cocoonase, that soften the cocoon. Some cocoons are constructed with built-in lines of weakness along which they will tear easily from inside, or with exit holes that only allow a one-way passage out; such features facilitate the escape of the adult insect after it emerges from the pupal skin.

Some pupae remain inside the exoskeleton of the final larval instar and this last larval "shell" is called a puparium (plural, puparia). Flies of the group Muscomorpha have puparia, as do members of the order Strepsiptera, and the Hemipteran family Aleyrodidae.[14]