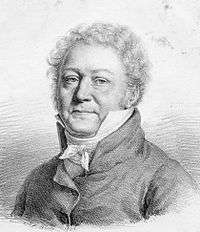 Guillaume Guillon-Lethière was the son of a Frenchman and a mulâtresse from Guadeloupe.

Similar classifications were octoroon for one eighth black and hexadecaroon for one sixteenth black.

Governments incorporated the terms in law defining rights and restrictions. The use of such terminology is a characteristic of hypodescent, which is the practice within a society of assigning children of mixed unions to the ethnic group which is perceived by the dominant group as being subordinate.[1] The racial designations refer specifically to the number of full-blooded African ancestors or equivalent, emphasizing the quantitative least, with quadroon signifying that a person has one-quarter black ancestry.

The word "quadroon" was borrowed from the French quarteron, and Spanish cuarterón, which have their roots in the Latin quartus, meaning to have a fourth or a "quarter" (25%) of something. The word octoroon is rooted in the Latin and Greek octo, which means eight.

Three generations in the same family 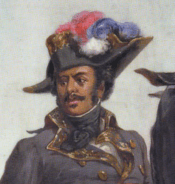 In Latin America, the terms griffe or sambo were sometimes used for an individual of three-quarters African heritage, or the child of a biracial parent and a fully black parent.[2]

The term mulatto was used to designate a person who was biracial, with one pure black parent and one pure white parent, or a person whose parents are both Mulatto.[2] In some cases, it became a general term to refer to all persons of mixed race.

The term octoroon referred to a person with one-eighth African/Aboriginal ancestry;[3] that is, someone with family heritage of one biracial grandparent; in other words, one African great-grandparent and seven European great-grandparents. As with the use of quadroon, this word was applied to a limited extent in Australia for those of one-eighth Aboriginal ancestry, as the government implemented assimilation policies.

Terceron was a term synonymous with octoroon, derived from being three generations of descent from an African ancestor (great-grandparent).[4] The term mustee was also used to refer to a person with one-eighth African ancestry.

The term mustefino refers to a person with one-sixteenth African ancestry.[2] The terms quintroon or hexadecaroon were also used.

In the French Antilles, the following terms were used during the 18th century:[5][6][7]

During the antebellum period, abolitionists featured mulattoes and other light-skinned former slaves in public lectures in the North, to arouse public sentiments against slavery by showing Northerners slaves who were visually indistinguishable from them, preventing them from putting the people in the category of "other".[8]

In literature and pop culture

The figure of the "tragic octoroon" or "tragic mulatto" became a stock character of abolitionist literature in the antebellum era, beginning in 1836 with the first American anti-slavery novel, Richard Hildreth's The Slave and including Harriet Beecher Stowe's bestselling 1852 novel Uncle Tom's Cabin and the extremely popular 1859 play by Dion Boucicault, The Octoroon.[9] Stereotypically, a light-skinned woman is raised as a white woman in her father's household, until his bankruptcy or death leaves her reduced to a menial position or even sold into slavery.[10] In some cases, she may be unaware of her full ancestry before being reduced to victimization, as in Lydia Maria Child's short story, The Quadroons.[11] This stock character allowed abolitionists to reveal the sexual exploitation prevalent in slavery.

In the period after the American Civil War, Southerners also began writing about people of mixed race, as a way to explore the many contradictions in a postwar society based on a binary division of race. The topic continues to be a means to explore race in society. Authors in the early 20th century were writing against a background of legal racial segregation and disfranchisement in the South; the successes of the civil rights movement have not solved all problems. Authors in the 21st century are writing historical novels set in the 19th century that explore racial permutations.

The Wife of His Youth and Other Stories of the Color Line, 1899, by Charles W. Chesnutt