This article is about the Latin phrase. For other uses, see Quo Vadis (disambiguation). 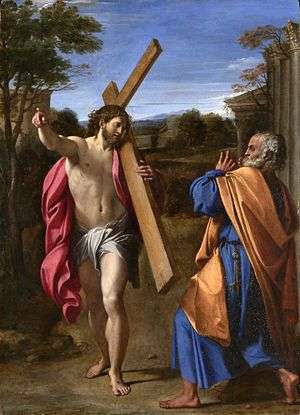 The modern usage of the phrase refers to a Christian tradition regarding Saint Peter. According to the apocryphal Acts of Peter (Vercelli Acts XXXV[1]), Peter is fleeing from likely crucifixion in Rome at the hands of the government, and along the road outside the city he meets the risen Jesus. In the Latin translation, Peter asks Jesus "Quo vadis?", to which he replies, "Romam eo iterum crucifigi" ("I am going to Rome to be crucified again"). Peter thereby gains the courage to continue his ministry and returns to the city, to eventually be martyred by being crucified upside-down.[2] The Church of Domine Quo Vadis in Rome is built where, according to legend, the meeting between Peter and Jesus took place.

The Polish writer Henryk Sienkiewicz authored the novel Quo Vadis: A Narrative of the Time of Nero (1895), which in turn has been made into motion pictures several times, including a 1951 version that was nominated for eight Academy Awards.[3] For this epic novel (among others), Sienkiewicz received the 1905 Nobel Prize for Literature.