See also: Quorum of the Twelve 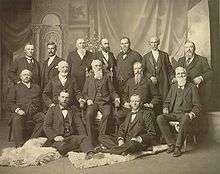 The quorum was first organized in 1835 and designated as a body of "traveling councilors" with jurisdiction outside areas where the church was formally organized, equal in authority to the First Presidency, the Seventy, the standing Presiding High Council, and the high councils of the various stakes.[2] The jurisdiction of the Twelve was originally limited to areas of the world outside of Zion or its stakes. After the apostles returned from their missions to England, Joseph Smith altered the responsibilities of the quorum: it was given charge of the affairs of the church, under direction of the First Presidency.[3][4][5]

Role of the quorum

Young emphasized what he said was Smith's authorization that the Quorum of the Twelve should be the central governing body of the church after Smith's death. Then, in 1847, the Twelve reorganized the First Presidency with Young as President, and the Twelve took on a supporting role within a chain of command under the First Presidency, a role that continues to the present.

The Quorum of the Twelve Apostles in the LDS Church has some general similarities to the College of Cardinals of the Roman Catholic Church, primarily in its duty to choose a successor upon the death of a church president.[6] There are differences, due in part to the President and the Twelve having life tenure, which may lead to an older or infirm President of the Church, but also provides considerable training of apostles to take over the office of the Presidency;[7] meaning "the members of quorum are being groomed for the job during this time."

Church policy decisions are made unanimously, with consultation among the First Presidency, the Quorum of the Twelve, and where appropriate, the Seventy, each of which has its own responsibility. Effort is made to ensure that the organizations are united in purpose and policy.

Each member of the quorum is accepted by the church as an apostle, as well as a "prophet, seer, and revelator." Thus, each apostle is considered to hold the rights ("keys of the priesthood") to use all powers granted by God to the church. Individually and collectively, the Twelve Apostles hold the keys and have conferred the authority to exercise all of the keys upon the President of the Church. Thus, as outlined in the Doctrine and Covenants, only the President of the Church is entitled to receive revelation or dictate policy for the entire church.

As a matter of policy, apostles are generally asked to retire from their professional careers and devote themselves to full-time church service, including memberships of boards and professional organizations. Some apostles receive assignments to become members of boards of church-owned for-profit corporations and trustees of the church's educational institutions. (Some exceptions have been made to this rule, as when quorum member Ezra Taft Benson was permitted to serve as United States Secretary of Agriculture from 1953 to 1961 and when quorum member Reed Smoot was permitted to serve in the United States Senate from 1903 to 1933.) The calling of an apostle is typically a lifetime calling.

The current members of the quorum are as follows: