The RAF Second Tactical Air Force (2TAF) was one of three tactical air forces within the Royal Air Force (RAF) during and after the Second World War. It was made up of squadrons and personnel from the RAF, the air forces of the British Commonwealth and exiles from German-occupied Europe. Renamed as British Air Forces of Occupation in 1945, 2TAF was recreated in 1951 and became Royal Air Force Germany in 1959.

2TAF was formed on 1 June 1943 as HQ Tactical Air Force from Army Co-operation Command, in connection with preparations then in train to invade Europe a year later. It took units from both Fighter Command and Bomber Command in order to form a force capable of supporting the Army in the field. Bomber Command provided No. 2 Group with light bombers; Fighter Command was split into the Air Defence of Great Britain, retaining fighter units for home defence, and No. 83 Group and No. 84 Group operating aircraft, and No. 85 Group controlling ground based units, for the Second Tactical Air Force. In addition, No. 38 Group for towing assault gliders and No. 140 Squadron, providing strategic photo-reconnaissance, were also part of the tactical air force at its inception.[2] 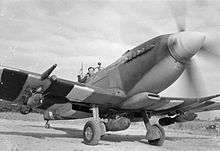 Geoffrey Page, commander of 125 Wing of the Second TAF, about to take off on a sortie from Longues-sur-Mer, Normandy, in a Spitfire IX, (June 1944)

2TAF's first commander was Air Marshal Sir John d'Albiac, who, on 21 January 1944, was succeeded by the man most associated with Second TAF, Air Marshal Sir Arthur Coningham. Coningham had great experience of the type of operations required for supporting fast moving ground warfare due to his command of the Desert Air Force in North Africa and Italy. He honed Second TAF into a command up to the challenges presented to it, and incorporated many of the lessons from Italy, including the use of the "cab rank" system for aircraft for close air support, into the doctrine of Second TAF.

By this late stage in the war, the Luftwaffe was but a pale shadow of the organisation it had once been. Mostly Second TAF spent its time supporting the British and Canadian forces on the left flank of Supreme Headquarters Allied Expeditionary Force's command. One notable exception was the last great attack of the Luftwaffe, Operation Bodenplatte, mounted on New Year's Day 1945, when the Second TAF suffered serious losses on the ground.

By the end of 1947, 2TAF had shrunk to ten squadrons at three airfields, all directly under control of the Air Headquarters at Bad Eilsen.[5] In 1951, the British Air Forces of Occupation reverted to their former name with the re-creation of the Second Tactical Air Force on 1 September 1951.

In November 1953, now at RAF Oldenburg, No. 26 Squadron was converted to Sabres, converting again to Hunters in July 1955, and remained a day-fighter unit until it was disbanded on 10 September 1957. It was reformed with Hawker Hunters at RAF Gutersloh on 7 June 1958 but was disbanded again on 30 December 1960.