Rabanus Maurus Magnentius (c. 780 – 4 February 856), also known as Hrabanus or Rhabanus, was a Frankish Benedictine monk and theologian who became archbishop of Mainz in Germany. He was the author of the encyclopaedia De rerum naturis ("On the Natures of Things"). He also wrote treatises on education and grammar and commentaries on the Bible. He was one of the most prominent teachers and writers of the Carolingian age, and was called "Praeceptor Germaniae," or "the teacher of Germany." In the most recent edition of the Roman Martyrology (Martyrologium Romanum, 2004, pp. 133), his feast is given as February 4th and he is qualified as a Saint ('sanctus').

Rabanus was born of noble parents in Mainz. The date of his birth remains uncertain, but in 801 he received was ordained a deacon at Benedictine Abbey of Fulda in Hesse, where he had been sent to school and had become a monk. At the insistence of Ratgar, his abbot, he went together with Haimon (later of Halberstadt) to complete his studies at Tours. There he studied under Alcuin, who in recognition of his diligence and purity gave him the surname of Maurus, after the favourite disciple of Benedict, Saint Maurus.[1]

Returning to Fulda, in 803 he was entrusted with the principal charge of the abbey school,[1] which under his direction became one of the most preeminent centers of scholarship and book production in Europe, and sent forth such pupils as Walafrid Strabo, Servatus Lupus of Ferrières, and Otfrid of Weissenburg. It was probably at this period that he compiled his excerpt from the grammar of Priscian, a popular textbook during the Middle Ages. According to Butler's Lives of the Saints, Rabanus ate no meat and drank no wine.

In 814 Rabanus was ordained a priest. Shortly afterwards, apparently on account of disagreement with Abbot Ratgar, he withdrew for a time from Fulda. This banishment has long been understood to have occasioned a pilgrimage to Palestine, based on an allusion in his commentary on Joshua. However, the passage in question is taken from Origen's Homily xiv In Librum Jesu Nave. Hence, it was Origen, not Rabanus, who visited Palestine.[2] Rabanus returned to Fulda in 817 on the election of a new abbot, Eigil, and at (Eigil's death in 822, Rabanus himself became abbot. He handled this position efficiently and successfully, but in 842 he resigned so as to have greater leisure for study and prayer, retiring to the neighbouring monastery of St Petersberg.

In 847 Rabanus was constrained to return to public life when he was elected to succeed Otgar as Archbishop of Mainz. He died at Winkel on the Rhine in 856.

Another of Rabanus' hymns, Christ, the fair glory of the holy angels (Christe, sanctorum decus Angelorum), sung for the commemoration of Saint Michael and All Angels, and to include the archangels Gabriel and Raphael, is found in English translation in The Hymnal 1982 (of the Episcopal Church), and was harmonized by Ralph Vaughan Williams.[4] 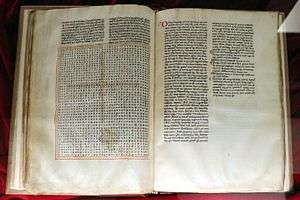 Rabanus' works, many of which remain unpublished, comprise commentaries on scripture (Genesis to Judges, Ruth, Kings, Chronicles, Judith, Esther, Canticles, Proverbs, Wisdom, Sirach, Jeremiah, Lamentations, Ezekiel, Maccabees, Matthew, the Epistles of St Paul, including Hebrews); and various treatises relating to doctrinal and practical subjects, including more than one series of homilies. In De institutione clericorum he brought into prominence the views of Augustine and Gregory the Great as to the training which was requisite for a right discharge of the clerical function.[5] One of his most popular and enduring works is a spectacular collection of poems centered on the cross, called De laudibus sanctae crucis, a set of highly sophisticated poems that present the cross (and, in the last poem, Rabanus himself kneeling before it) in word and image, even in numbers.[6]

Among the others may be mentioned the De universo libri xxii., sive etymologiarum opus, a kind of dictionary or encyclopedia, heavily dependent upon Isidore of Seville's Etymologies, designed as a help towards the typological, historical and mystical interpretation of Scripture, the De sacris ordinibus, the De disciplina ecclesiastica and the Martyrologium. All of them are characterized by erudition (he knew even some Greek and Hebrew).

In the annals of German philology a special interest attaches to the Glossaria Latino-Theodisca. A commentary, Super Porphyrium, printed by Cousin in 1836 among the Ouvrages inédits d'Abélard, and assigned both by that editor and by Haurau to Hrabantis Maurus, is now generally believed to have been the work of a disciple.

In 2006 Germans marked the 1150th anniversary of his death, especially in Mainz and in Fulda. Highlights of the celebrations included the display of Codex Vaticanus Reginensis latinus 124, an extremely rare loan by the Vatican to Mainz of a spectacular manuscript containing De laudibus sanctae crucis. The anniversary also saw the publication of no fewer than three book-length studies of Maurus and his work.[7]

Recent critical editions are available of some of his works:

Publications on the occasion of the 1150th anniversary of his death: