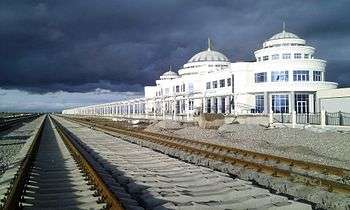 Bereket (Kazandzhik) in Turkmenistan. The town originated from a railway station built in 1885. The city is now an important crossroad of the old Trans-Caspian Railway and new North-South Transnational Railway.

A railway town, or railroad town, is a settlement that originated or was greatly developed because of a railway station or junction at its site.

In Victorian Britain, the spread of railways greatly affected the fate of many small towns. Peterborough and Swindon became successful due to their status as railway towns; in contrast, towns such as Frome or Kendal remained small after being bypassed by main lines.[1] Some entirely new towns grew up around railway works. Middlesbrough was the first new town to be developed due to the railways, growing from a hamlet of 40 into an industrial port after the Stockton and Darlington Railway was extended in 1830.[2] Wolverton was fields before 1838 and had a population of 1,500 by 1844.[3] Other examples of early railway towns include Ashford (Kent), Doncaster and Neasden.[4]

The growth of railway towns was often in the mould of the 'paternalistic employer' providing housing, schools, hospitals, churches and civic buildings for their workers, similar to Cadbury's Bournville;[4][6] there was a "very rigid and unimaginative control" of the workers by GWR in Swindon.[4] Workforces were loyal and obedient: industrial action in railway towns was rare because the workforce depended on the company. Railwaymen dominated local politics in railway towns, particularly Francis Webb's 'Independent Railway Company Party' in Crewe and George Leeman in York. The chief mechanical engineer of GWR, Daniel Gooch, was MP of Swindon for twenty years.[6]

Crewe was a 'company town' for its first few decades as workers moved in their thousands from other parts of the country. Most social amenities and organisations were sponsored by the railway, but moves such as the establishment of a town council in 1877 slowly reduced company influence, and the railway company began to consider spending on town amenities as a municipal concern.[5] Workers organised their own institutions such as clubs, trade unions, and co-operatives to gain independence from company control, and they became the basis for political opposition in railway towns.[6]

In the 1870s successive boomtowns sprung up in Kansas, each prospering for a year or two as a railhead, and whithering when the rail line extended further west and created a new endpoint for the Chisholm Trail.

Sayre, Pennsylvania and Atlanta, Georgia were among the American company towns created by railroads in places where no settlement already existed.

In western Canada, railway towns became associated with brothels and prostitution, and concerned railway companies started a series of YMCAs in the late nineteenth century in response.[7]

In some cases, a railroad town would be started by the railroad, often using a separate town or land company, even when another town already existed nearby. The population of the existing town would shift to the railroad town. This would create a boon for the town company and its railroad founder, which would sell off lots near the station at a substantial profit, often before the railroad ever arrived at the new townsite.

Such is the case with Durango, Colorado. In the spring of 1880, William Bell of the Denver & Rio Grande Railroad scoured the La Plata County area in the vicinity of Animas City, located on the Animas River. When negotiations to acquire land through the local homesteaders fell through, Bell acquired property downstream to the south under more favorable conditions in the name of the Durango Land and Coal Company. By the end of the year, a Durango newspaper reported all of "Animas City is coming to Durango as fast as accommodations can be secured."[8] The population, at the time estimated between 2,500 and 3,000 people, crammed into the little "box town," where the only permanent structures were saloons, dance halls, restaurants and stores.

When the railroad arrived in August 1881, the train stopped in a jubilant Durango, not Animas City. The railroad pushed on up the Animas River, reaching Silverton in July 1882,[8] passing through Animas City without a stop. Animas City subsisted as a de facto suburb of the Durango area before annexation by Durango in 1948.[9] The Durango and Silverton Narrow Gauge Railroad, a heritage railroad and successor to the Rio Grande in La Plata County, still passes by the townsite.

In Denmark, Sweden and Norway, a related concept is the stationsby or "station town". Stationsbyer are rural towns that grew up around railways, but they were based on agricultural co-operatives and artisan communities rather than on railway industries.[10][11]

Changchun in China was built by the Japanese, then occupying Manchuria, as a 'model town' as part of Japan's imperialist modernisation. The first railway town at Changchun was begun by the Russians in 1898, but it excluded Chinese residents. A second major railway town was designed and built from 1905 by the South Manchuria Railway, inspired by Russian railway towns such as Dalian. It was based on a rectangular system that contrasted with the circular walled town of old Changchun, and grid patterns became the standard for Chinese railway towns. The SMR developed dozens of railway towns in north-east China from 1906-1936, such as at Harbin and Mukden.[12][13]