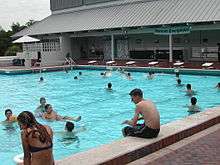 Ransom Everglades is an independent, non-profit, co-educational, college-preparatory day school serving grades six to twelve in Coconut Grove in Miami, Florida. It formed with the merger in 1974 of the Everglades School for Girls and the Ransom School for Boys.[1] It's described as a college preparatory school and 100% of Ransom Everglades' students attend a four-year institution after graduation.[2]

Admission is competitive and tuition costs $34,100 per year (2015–16).[3] Financial aid is available. Graduating classes tend to number between 140 and 160 students (2007-2010 average: 142); approximately 85% continue onto out-of-state colleges and universities. Despite its size, the school has a comprehensive athletic program with over 70 teams among 18 interscholastic sports.[4] Over 90% of the student body participates in team sports.

Paul C. Ransom, an educator and New York lawyer, opened Pine Knot Camp in 1896 as a school for boys. In 1902 he combined that with a campus in the Adirondacks of New York to create the Adirondack-Florida School, the first two-campus boarding school. Students would attend classes in the Florida campus in the winter and New York campus in fall and spring.[5][6] The school suspended operations during World War II. After the war the school reopened in 1947. In 1949 the Adirondack campus was shut down and the school continued in Coconut Grove as the Ransom School for Boys.[7][8] Ransom School changed from a boarding to a day school in 1972.[9] Its counterpart, the Everglades School for Girls, began in 1955 founded by Marie B. Swenson.[10] The schools merged and took its current name in 1974.

One of the early buildings still stands on the campus, the pagoda was built in 1912 and served as the original library for the school.[11] In more recent years it has served as the Head of School's office. It's often featured in historic pictures of South Miami, and in 1973 was listed in the National Register of Historic Places.[1][6][12]

The school occupies two campuses. The "Upper School" (Ransom Campus) serves grades nine through twelve and is located on Main Highway on the shore of Biscayne Bay, the site of the original Pine Knot Camp. This makes it the oldest South Florida school still in its original location.[6] The "Middle School" (Everglades Campus) serves grades six through eight and is located on South Bayshore Drive, about one and a half miles from the Upper School. It is not on the water but is in a residential neighborhood and a mile away from the restaurants and shops of Coconut Grove. It is also the original site of the Everglades School for Girls.

Both Campuses are featured in the 1998 movie Wild Things.