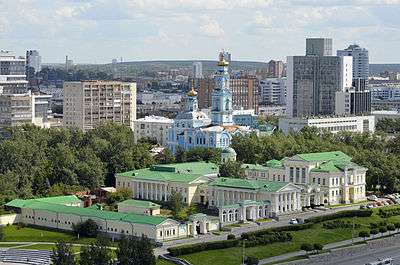 Alexander I of Russia visited the Kharitonov Palace in 1824.

The Kharitonov Palace is arguably the grandest palatial residence in the Urals. This Neoclassical townhouse was commissioned in 1794 by Lev Rastorguyev, an Old Believer merchant and landowner. The main house was built on the so-called Annunciation Hill in Yekaterinburg. The nearby Annunciation Church was built at the same time.

The palace takes its present name from Pyotr Kharitonov, Rastorguyev's son-in-law. He inherited the property in 1824 and employed architect Mikhail Pavlovich Malakhov to connect the buildings with a series of covered passageways. An English park on the grounds was also commissioned by Kharitonov. His harsh treatment of the serfs gave rise to a bevy of legends about a network of underground chambers and passages where his peasants were tortured.

In 1837 Kharitonov was officially censured for his cruelty, put on trial and condemned to life imprisonment in Kexholm Fortress. The palace fell into disuse. It was repaired in the late 1930s to house a local Pioneers Palace. Pyotr Latyshev, the Presidential Envoy to Urals Federal District, planned to take over the palace in 2000. It was officially designated his residence but, following a protest campaign, these plans fell through.