In classical mechanics, a reactive centrifugal force forms part of an action–reaction pair with a centripetal force.

In accordance with Newton's first law of motion, an object moves in a straight line in the absence of any external forces acting on the object. A curved path may however ensue when a physical acts on it; this force is often called a centripetal force, as it is directed toward the center of curvature of the path. Then in accordance with Newton's third law of motion, there will also be an equal and opposite force exerted by the object on some other object,[1][2] such as a constraint that forces the path to be curved, and this reaction force, the subject of this article, is sometimes called a reactive centrifugal force, as it is directed in the opposite direction of the centripetal force.

A ball in circular motion held by a string tied to a fixed post.

The figure at right shows a ball in uniform circular motion held to its path by a massless string tied to an immovable post. The figure is an example of a centrifugally-directed real force. In this system a centripetal force upon the ball provided by the string maintains the circular motion, and the reaction to it, usually called the reactive centrifugal force acts upon the string. In this model, the string is assumed massless and the rotational motion frictionless, so no propelling force is needed to keep the ball in circular motion.

Newton's first law requires that any body not moving in a straight line is subject to a force, and the free body diagram shows the force upon the ball (center panel) exerted by the string to maintain the ball in its circular motion.

Newton's third law of action and reaction states that if the string exerts an inward centripetal force on the ball, the ball will exert an equal but outward reaction upon the string, shown in the free body diagram of the string (lower panel) as the reactive centrifugal force.

It should be noted, however, that the reason the post appears to be "immovable" is because it is fixed to the earth. If the rotating ball was tethered to the mast of a boat, for example, the boat mast and ball would both experience rotation about a central point.

Even though the reactive centrifugal is rarely used in analyses in the physics literature, the concept is applied within some mechanical engineering concepts. An example of this kind of engineering concept is an analysis of the stresses within a rapidly rotating turbine blade.[1] The blade can be treated as a stack of layers going from the axis out to the edge of the blade. Each layer exerts an outward (centrifugal) force on the immediately adjacent, radially inward layer and an inward (centripetal) force on the immediately adjacent, radially outward layer. At the same time the inner layer exerts an elastic centripetal force on the middle layer, while and the outer layer exerts an elastic centrifugal force, which results in an internal stress. It is the stresses in the blade and their causes that mainly interest mechanical engineers in this situation. 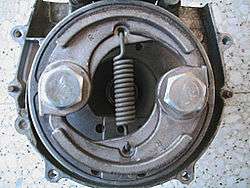 A two-shoe centrifugal clutch. The motor spins the input shaft that makes the shoes go around, and the outer drum (removed) turns the output power shaft.

Reactive centrifugal force, being one-half of the reaction pair together with centripetal force, is a concept which applies in any reference frame. This distinguishes it from the inertial or fictitious centrifugal force, which appears only in rotating frames.