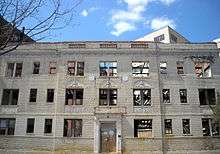 An abandoned building in Washington, D.C. being converted into luxury condominiums.

Redevelopment is any new construction on a site that has pre-existing uses.

Variations on redevelopment include:

Redevelopment projects can be small or large ranging from a single building to entire new neighborhoods or "new town in town" projects.

A new example of other neighborhood improvement initiatives is the funding mechanism associated with high carbon footprint air quality urban blight. Assembly Bill AB811 is the State of California's answer to funding renewable energy and allows cities to craft their own sustainability action plans. These cutting edge action plans needs the funding structure; which can easily come forward through redevelopment funding.

Some redevelopment projects and programs have been incredibly controversial including the Urban Renewal program in the United States in the mid-twentieth century or the urban regeneration program in Great Britain. Controversy usually results either from the use of eminent domain, from objections to the change in use or increases in density and intensity on the site or from disagreement on the appropriate use of tax-payer funds to pay for some element of the project. Urban redevelopment in the United States has been controversial because it forcibly displaces poor and lower middle class populations and turns over their land to wealthy redevelopers for free or for a below-market-value price. They then use that land to construct private shopping malls, office buildings, automobile factories and dealerships, and even gambling casinos. This is done and permitted by American courts in spite of the fact that the Fifth Amendment to the United States Constitution allows the use of eminent domain only for "public use."

The residents displaced by redevelopment are routinely undercompensated, and some (notably month-to-month tenants and business owners) are not compensated at all. Historically, redevelopment agencies have been buying many properties in redevelopment areas for prices below their fair market value, or even below the agencies' own appraisal figures because the displaced people are often unaware of their legal rights and lack the will and the funds to mount a proper legal defense in a valuation trial. Those who do so usually recover more in compensation than what is offered by the redevelopment agencies.

The controversy over misuse of eminent domain for redevelopment reached a climax in the wake of the U.S. Supreme Court's 2005 5 to 4 decision in Kelo v. City of New London, allowing redevelopment takings of sound, unblighted homes, solely to allow redevelopers to put the taken land to more profitable uses and thus increase the revenue flow to the local municipality. The Kelo decision was widely denounced and remains the subject of severe criticism. Remedial legislation has been introduced and in some cases passed, in a number of states.

Further information: Area redevelopment plan and Canada Lands Company
This list is incomplete; you can help by expanding it.