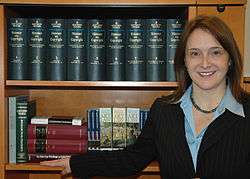 The Register of Copyrights is the director of the United States Copyright Office within the Library of Congress, as provided by 17 U.S.C. § 701. The Office has been headed by a Register since 1897. The Register is appointed by, and responsible to, the Librarian of Congress.

Although the title suggests a clerical role, Registers of Copyrights have been responsible for creating the procedures and practices of the Copyright Office and establishing standards for registration of copyright. They have increasingly been responsible for setting or influencing United States copyright policy. Today the Register is responsible for administering rulemaking procedures and producing authoritative interpretations of some aspects of U.S. copyright law, as well as advising the Librarian of Congress on the triennial proceeding on exceptions to the anticircumvention rules of the Digital Millennium Copyright Act. The Register also routinely testifies before Congress on copyright policy matters.

Maria A. Pallante was the twelfth appointed register and the fifteenth person to serve in the position. She initially took the position in an acting capacity following the December 31, 2010 retirement of the previous Register, Marybeth Peters.[2][3] On June 1, 2011, Pallante was permanently appointed to the position.[4]