The Republic of Korea Marine Corps (ROKMC; Korean: 대한민국 해병대; Hanja: 大韓民國海兵隊; Revised Romanization: Daehanminguk Haebyeongdae), also known as the ROK Marine Corps, or the ROK Marines, is the marine corps of South Korea. Though theoretically it is under the direction of the South Korean Chief of Naval Operations（Korean：-{대한민국 해군작전사령부}-）, the ROK Marine Corps operates as a distinct arm of the South Korean Armed Forces, unlike the marine corps of most other countries, which generally operate as part of a navy. The ROKMC was founded as a suppression operations force against communist partisans just prior to the start of the Korean War. The ROKMC also saw combat during the Vietnam War, while stationed in Da Nang, occasionally fighting alongside the U.S. Marines.

On April 15, 1949, the Republic of Korea Marine Corps (ROKMC) was founded at Deoksan airfield in Jinhae with an initial strength of 380 men and was modeled around the United States Marine Corps. Lieutenant Colonel Shin Hyun-joon was appointed to lead as the first Commandant of the newly formed Marine Corps and he was promoted to Colonel on July 1, 1949.[1] The ROKMC troops were issued with many secondhand weapons from the Imperial Japanese Army used during World War II, including the 7.7 mm Type 99 Light Machine Gun. The Marine Corps carried out suppression operations against communist elements in Jinju and Jeju-do. The ROKMC saw combat actions in the Korean War, including the Battle of Incheon.

At the request of the United States, South Korean President Park Chung Hee agreed to send military units into Vietnam, despite opposition from both the Assembly and the public. In exchange, the United States agreed to reimburse additional military budgets to South Korea to help modernize its armed forces, totaling about a billion dollars.

The Republic of Korea Army's Tactical Area of Responsibility was the southern half of the I Corps. The ROKMC was deployed with the I Corps, alongside U.S. Marines.

In 1973, once a separate branch of the ROK Armed Forces, the ROKMC became a part of the Republic of Korea Navy (ROKN). In 1974, Commander Lee Dong-Yong of the 1st Marine Division modified the 1st Division's infantry regiment to specialize its each of 3 battalions to Airborne/Amphibious Infiltration/Ranger. This system distinguishes the 1st Marine Division from other ROKMC divisions and brigades. 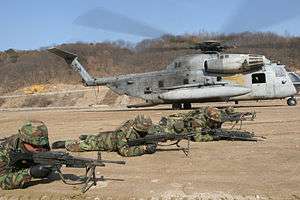 In 1982, ROKMC established the '812nd "Hammer" Unit'. Their mission was to perform retaliation operations against the DPRK forces. The unit's motto was 'Kill'em all, Let God sort'em out'. Their training included a 10 km ruck march in an hour with full combat gear, and carrying a 100 kg IBS(Inflatable Boat Small) overhead. Training also included 12 km continuous sea swimming.[2]

The Headquarters of the Republic of Korea Marine Corps was re-established in 1987.

On November 23, 2010, the Bombardment of Yeonpyeong incident occurred. There was a rigorous engagement between the DPRK Army and ROKMC YP unit. By result of this event, the ROK government cancelled its Military Reform Plan 2020 which was to downsize the number of Marine Corps personnel deployed in North-West islands. Instead, the ROK government established the Military Reform Plan 307 (Plan 307). 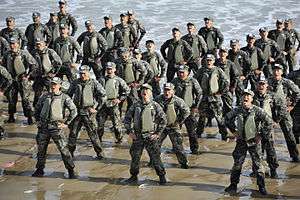 Plan 307 also includes a plan to fortify all 5 islands in the North-West area until 2015 by constructing bunkers for tanks, K-9 Thunder, K-10 ARV and civilians, digging trenches, establishing Guided-Missile unit which is equipped with 60 Spike missiles and 4 launchers,[6][7] deploying the Hostile Artillery Locating System (HALO) which is manufactured by the Selex Galileo company, creating an AH-1S Cobra unit under the 6th Marine Brigade in Baengnyeongdo, increasing size of artillery units in Yeonpyeong from company to battalion which changed their number of K-9 Thunder from 6 to 18,[8] deploying the K-SAM Chunma and the K-136 multiple rocket launcher to North-West islands and increasing numbers of marines in North-West islands by more than 1000.[9] On June 23, 2011, the South Korean National Assembly legislated a law that states the right that personnel management can be exercised by the ROKMC Commandant instead of the ROKN Chief of Naval Operations (Until 2011, the CNO exercised the latter), legislating the ROKMC Deputy Commandant, dividing and specifying ROKMC's main operation as 'amphibious operations' from ROKN 'naval operations', including the ROKMC Commandant as a formal member of the joint chiefs of the staff council, legislating the ROKMC Commandant as a member of the Defense Project Promotion Committee, giving him rights to select the uniform from CNO to the ROKMC Commandant and making the latter exercise the rights of the Management of Military Supplies of the ROKMC.[10][11]

By dividing the ROKMC's main operation from ROKN, ROKMC made a stepping-stone to become a National Strategic Mobile Force.

On October 15, 2011, The law mentioned above took effect. ROKMC retrieved their record of service back from ROKN on October 13. ROKMC started issuing new uniforms since October 1. The ROKMC used to wear their own distinct uniforms before 1973, but after the ROKMC HQ were dissolved, the ROK Marines had to wear the uniform the same uniforms with other forces. This new uniform is different from the new uniform of the ROKA, ROKN and the ROKAF (These 3 forces use same uniform). The new uniform was designed to camouflage marine personnel for amphibious operations by using colors of beach, sand and seaweed.[12]

The marine corps, with 29,000 personnel, is organized into two divisions and one brigade under the Marine Corps Command. After the bombardment of Yeonpyeong, the ROKMC commander also holds the commander position of the NWIDC (North Western Island Defence Command). The 1st Marine Division can operate in sea, air, land, with specializing its 3 infantry battalions under a single regiment to Airborne/Amphibious Assault/Ranger. Furthermore, the ROKMC's Recon units (2 Reconnaissance Battalions and 1 Reconnaissance Company) hold various special warfare trainings such as scuba and parachuting.

In March, 2016, the ROK MoD announced the creation of a new "Spartan 3000" regiment consisting of 3000 of ROK Marines. The unit will be combat ready to be deployed in any part of the Korean Peninsula within 24 hours in case of an attack from the DPRK forces and will be responsible for targeting high priority targets in North Korea including nuclear facilities. This new announcement also aims to make the ROK deployment strategy more efficient as it aims to be able to deploy a ROKMC regiment within 24 hours instead of the current 48 hours.[14][15]

The ROKMC relies on the ROK Navy for medical treatment of WIA, as specially trained Navy medics are to some extent integrated into the Marine Corps' units and also instructing fundamental first-aid techniques to new recruits (similar to the USMC's Navy Corpsmen). 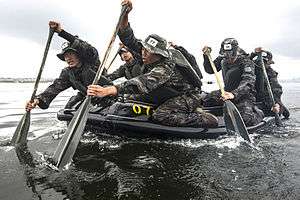 Acquisition plans are tied to Army procurement and focus on increasing tactical mobility, firepower, and command and control.

Until the mid-1990s, the ROKMC fleet of Amphibious Vehicles consisted of 61 Landing Vehicles Tracked (LVT) and 42 AAV7A1. In the early 1980s all Amtracs in ROKMC service were modified to LVTP7A1 standard, but the original variant remained for many more years in service. In an effort to replace the LVTs, the ROKMC undertook a 57 AAV7A1 co-production contract, later increased with an additional 67 AAV7A1 vehicles. Since 1998, South Korea had deployed these 124 new vehicles to enhance its defense against North Korea as well as replacing its current fleet consisting of obsolete vehicles.

The Marine Corps has no aircraft of its own, thus relying on aerial support from the Army and Navy. The service plans to create an aviation brigade with transport and KAI Surion attack helicopters by 2015. To strengthen its intelligence-gathering and surveillance capabilities, the service also is considering deploying unmanned aerial vehicles for reconnaissance.

The current M48A3K Main Battle Tanks are being replaced by around 50 to 60 K1A1 tanks. To support the force, K-55, K9 self-propelled howitzers and KH-179 towed howitzers are used. The individual equipment may vary. The old ERDL type camouflage is still in use with training units, although it has been phased out largely by the ROKMC's new digital camouflage. The M-1956 Load-Carrying Equipment, alongside large backpacks (similar to the ALICE backpacks) are still used, though most units now have been issued newer, updated LCE gear or combat vests and often also body-armor/plate-carriers and modern rucksacks with MOLLE webbing. The helmets in use are of the traditional steel-type (similar to the M1 and M80) and Kevlar helmets. Some units, such as Recon units, prefer the use of boonie hats.

By the end of 2017, ROK Marine Corps forces are to deploy the Bigung (flying arrow) guided 2.75 in (70 mm) rocket near the Northern Limit Line (NLL) along the western sea border to protect the islands of Baengnyeong and Yeonpyeong from assault by North Korean hovercraft. The Bigung is 1.9 m (6.2 ft) long and weighs 15 kg (33 lb) with a range of 5–8 km (3.1–5.0 mi). Each system is capable of engaging multiple craft, with target acquisition and designation sights (TADS) and an uncooled infrared detector that can independently detect and track multiple targets simultaneously. Compared to coastal artillery, the truck-mounted launcher is more mobile and versatile, and can fire up to 40 rockets at once. The Agency for Defense Development partnered with LIG Nex1 for development and production.[17][18]

Firearms in-use are the following: