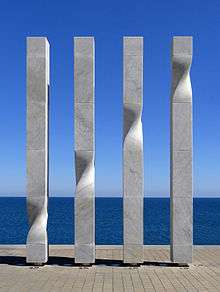 Bofill was raised in a Catalan bourgeois family. His father, named Emilio Bofill, was a builder and developer, Bando Republican, and liberal and a progressive that was vehemently against Francisco Franco’s regime. Ricardo’s mother, Maria Levi, was an Italian Jew, that functioned as the matriarchal pillar of the family.

During his adolescence, Ricardo Bofill studied at the Lycée Français de Barcelone. He spent much of his youth traveling throughout Spain, spending a significant amount of time in Andalusia where he discovered Spanish vernacular architecture.[1] In 1957, he attended the Barcelona School of Architecture. While there, like many students of the time, he began developing strong Marxist ideals. During a demonstration, he was arrested and expelled from the university and Spain. Ricardo Bofill fled Barcelona in 1958 for Geneva, where he attended the Université de Beaux-Arts Genève to complete his education.

In 1963 Ricardo Bofill joined his family business, forming a multidisciplinary, multitalented team consisting of architects, engineers, planners, sociologist, writers, movie makers and philosophers. Bofill recuperated the characteristic craftsmanship of traditional Catalan architecture. Later on, he began to deal with local urban planning problems, within the Spanish political and social level. The necessity to approach large scale projects, led Bofill’s team to conceive a ridged yet organic methodology based on the geometric formation of elements in space. Such was developed in a theoretical manner with the project The City in Space, and realized with the construction of Walden 7.

Projects like Muralla Roja in 1973 and Xanadu in 1971 are renowned for their adherence to Critical Regionalism and can be seen as Ricardo Bofill’s reaction against the modernist architectural tendencies and the politics of the time in Spain.

The conversion of the abandoned cement factory from the late 19th century into RBTA’s studios and Ricardo Bofill’s personal residence, began with a process of destruction, demolishing pieces of the structures to reveal hidden forms. The factory lies directly next to Walden 7, in Sant Just Desvern, Spain.

The remaining eight silos were transformed into offices, a model making laboratory, archives, a library, a gigantic space known as "The Cathedral", used for meetings, exhibitions, concerts, and professional activities of the architect. Above the Cathedral lies Ricardo’s residence, green roofs and terraces. The entire complex was planted with lush gardens to create the effect of an oasis within the industrial area.

The renovation project, which began in 1973, incorporates various architectural languages; Catalan Civic Gothic style and Surrealist elements and is an early example of European Post Modernism.

As a result of the economic crisis and the tense political situation in Spain, Ricardo began focusing elsewhere. In 1971, Ricardo formed a complementary team in Paris, in response to the demands of various projects for the French “New Towns”. During this phase, Bofill introduced in his proposals symbolic elements directly related to the French monumental architecture. La Petite Cathédrale and La Maison d’Abraxas are examples of these inhabited monuments.

In France, Ricardo Bofill’s name is largely associated with the project of Les Halles. In 1974 Ricardo Bofill won the French Ministry of Culture’s competition for “le trou des Halles” along with 10 other teams. The concept of Bofill’s scheme was “a monument within the city”, a green area with architectural character as per French tradition, a place in the heart of Paris where people could meet . Despite being considered the winner of the competition, and beginning construction of the project, enormous controversy ensued when the mayor of Paris, Jacques Chirac, decided to raze Bofill’s project, and imposed the construction of the scheme by architect Jean Willerval.

From 1979 on, the activities of Bofill’s Taller de Arquitectura took place mainly in France, focusing primarily on social housing, with the simultaneous construction of four projects: Les Arcades du Lac and Le Viaduc in Saint Quentin-en-Yvelines Building; Le Palais d’Abraxas, Le Théâtre and L’Arc in Marne-la-Vallée; Les Echelles du Baroque in the XIV district in Paris; as well as Antigone[2] in Montpellier.

Bofill’s design studies for precast concrete units contributed in the 80’s, to the Taller’s affirmationof the validity of classical forms and geometry in contemporary architecture. Today,Ricardo is seen as one of the founding European Post Modernists. In the 1990s,the inclusion of glass and steel amongst the materials used in his projects is simply the outcome of a process marked by the study of and research into forms and materials, as seen in the BNP Paribas Headquarters and Parfums Christian Dior Headquarters in Paris, and United Airlines Headquarters in Chicago.

In 2000, Bofill centralized El Taller’s activities to its headquarters, La Fabrica, in the outskirts of Barcelona. As always, Ricardo Bofill Taller de Arquitectura is a family business. His two sons Ricardo E. Bofill, acting as President, and Pablo Bofill, serving as CEO, help lead a diverse team. Together with his two partner architects, Peter Hodgkinson and Jean- Pierre Carniaux, Bofill’s Taller continues the spirit and philosophy that motivated his team in the early 1960s to approach international projects from the large scale of urban design contributing to a new "integrated urbanism”, which include the schemes for Luxembourg’s Place de l’Europe, New Castellana in Madrid, Boston Central Artery, Moscow Agglomeration’s City Expansion and large infrastructures for public transport, such as the Barcelona Airport’s Terminal 1[3] and 2.

El Taller has continued to create sports, cultural, and retail facilities in Europe and Asia; both social and Class A residential buildings, from Senegal to Stockholm, from Beijing to Paris; office buildings and headquarters of leading companies in the US, France and Spain. One of the formable post modern architects, Bofill still utilizes classical composition to resolve the monotony of pre-fabrication, as seen in the Hague’s Monchyplein scheme and recent projects in Russia. But Ricardo Bofill cannot be typecast, as the W Hotel in Barcelona and Polytechnic University Mohammed VI are proof of his diverse architectural abilities.

While Ricardo Bofill Taller de Arquitectura works on all types of projects, from master plans to luxury residences, the core of its business and interest remains in social housing, which it continues to design across the world.

Presented in a museum space for the first time as part of the exhibition Subversive Practices, this work has remained virtually unknown, with few public screenings, for almost forty years. Its original subtitle – A Fictitious Report on the Architecture of the Brain – does not just refer to the process-based methodology characteristics of conceptual practices and “information art” but also indicates the type of activities carried out by the Taller de Arquitectura. This multidisciplinary platform was created in 1960 by Ricardo Bofill. Its collaborators included poets such as José Agustin Goytisolo, politicians like Salvador Clotas, artists like Daniel Argimon and Joan Ponç, actresses like Serena Vergano, and, lastly, architects such as Anna Bofill, Peter H. Hodgkinson, Ramón Collado, Xavier Bagué, and Manuel Nuñez Yanovsky. The film is a study of the relationship between art and madness and describes the horror of the human condition – a mere instant between nothingness and nothingness. The piece is an experimental documentary on the structure of a brain, reflecting the disquiet of an artist and his distorted vision of the world.