Ricardo Legorreta Vilchis (May 7, 1931 – December 30, 2011)[1] was a Mexican architect. He was a prolific designer of private houses, public buildings and master plans in Mexico, the United States and some other countries.[2]

Ricardo Legorreta was born on May 7, 1931, in Mexico City. He studied architecture at the Universidad Nacional Autónoma de México, from where he graduated in 1953. After working for five years with José Villagrán García, he established his own office in 1963.[2]

Legorreta was a disciple of Luis Barragán and carried Barragan's ideas to a wider realm. Barragan, in the 1940s and 1950s amalgamated tradition and the modern movement in architecture yet his work is mostly limited to domestic architecture. Legorreta applied elements of Barragan's architecture in his work including bright colors, play of light and shadow, and solid Platonic geometric shapes. One of the important contributions of Legorreta has been the use of these elements in other building types such as hotels, factories as well as in commercial and educational buildings. His most famous works are the Camino Real Hotel in Mexico City, the IBM Factory in Guadalajara and the Cathedral of Managua. 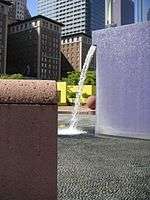 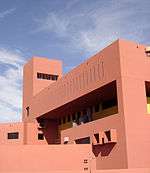