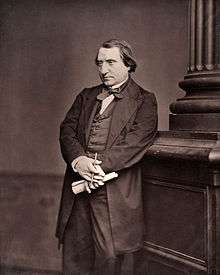 French historian Ernest Renan defended the right to exist in "What is a Nation?" (1882).

The right to exist of a de facto state may be balanced against another state's right to territorial integrity.[1] Proponents of the right to exist trace it back to the "right of existence," said to be a fundamental right of states recognized by writers on international law for hundreds of years.[2]

Thomas Paine used the phrase "right to exist" to refer to forms of government, arguing that representative government has a right to exist, but that hereditary government does not.[3] In 1823, Sir Walter Scott argued for the "right to exist in the Greek people".[4] (The Greeks were then revolting against Turkish rule.) According to Renan's "What is a Nation?" (1882), "So long as this moral consciousness [called a nation] gives proof of its strength by the sacrifices which demand the abdication of the individual to the advantage of the community, it is legitimate and has the right to exist. If doubts arise regarding its frontiers, consult the populations in the areas under dispute."[5] Existence is not a historical right, but "a daily plebiscite, just as an individual's existence is a perpetual affirmation of life," Renan said.[5] The phrase gained enormous usage in reference to the breakup of the Ottoman Empire in 1918. "If Turkey has a right to exist – and the Powers are very prompt to assert that she has – she possesses an equally good right to defend herself against all attempts to imperil her political existence," wrote Eliakim and Robert Littell in 1903.[6] In many cases, a nation's right to exist is not questioned, and is therefore not asserted.

Arab recognition of Israel's right to exist was part of Folke Bernadotte's 1948 peace plan.[7] The Arab states gave this as their reason to reject the plan.[7] In the 1950s and 1960s, most Arab leaders did not dare admit that Israel had a right to exist.[8] The issue was described as the central one between Israel and the Arabs.[9]

After the June 1967 war, Egyptian spokesman Mohammed H. el-Zayyat stated that Cairo had accepted Israel's right to exist since the signing of the Egyptian-Israeli armistice in 1949.[10] He added that this did not imply recognition of Israel.[10] In September, the Arab leaders adopted a hardline "three nos" position in the Khartoum Resolution: No peace with Israel, no recognition of Israel, and no negotiations with Israel.[11] But in November, Egypt accepted UN Security Council Resolution 242, which implied acceptance of Israel's right to exist. At the same time, President Gamal Abdel Nasser urged Yasser Arafat and other Palestinian leaders to reject the resolution. "You must be our irresponsible arm," he said.[12] King Hussein of Jordan also acknowledged that Israel had a right to exist at this time.[13] Meanwhile, Syria rejected Resolution 242, saying that it, "refers to Israel's right to exist and it ignores the right of the [Palestinian] refugees to return to their homes."[14]

Upon assuming the premiership in 1977, Menachem Begin spoke as follows: Our right to exist—have you ever heard of such a thing? Would it enter the mind of any Briton or Frenchman, Belgian or Dutchman, Hungarian or Bulgarian, Russian or American, to request for its people recognition of its right to exist? ..... Mr. Speaker: From the Knesset of Israel, I say to the world, our very existence per se is our right to exist![15]

As reported by the Financial Times, in 1988 Yasser Arafat declared that the Palestinians had accepted Israel's right to exist.[16] In 1993, there was an official exchange of letters between Israeli Prime Minister Yitzhak Rabin and Chairman Arafat, in which Arafat declared that "the PLO affirms that those articles of the Palestinian Covenant which deny Israel's right to exist, and the provisions of the Covenant which are inconsistent with the commitments of this letter are now inoperative and no longer valid."[17]

In 2011, the PA Ambassador to India, Adli Sadeq, wrote in the official PA daily: "They [Israelis] have a common mistake or misconception by which they fool themselves, assuming that Fatah accepts them and recognizes the right of their state to exist, and that it is Hamas alone that loathes them and does not recognize the right of this state to exist. They ignore the fact that this state, based on a fabricated [Zionist] enterprise, never had any shred of a right to exist."[20] In a different part of the article the PA ambassador explained this explicitly: "There are no two Palestinians who disagree over the fact that Israel exists, and recognition of it is restating the obvious. But recognition of its right to exist is something else, different from recognition of its [physical] existence."[20]

In 2013 Hamas Prime Minister Ismail Haniyeh reiterated that the Palestinian Arabs as a whole will never recognize Israel's right to exist, and certainly not to exist as the Jewish state, by saying: "We had two wars...but Palestinians did not and will not recognize Israel".[21]

In 1947, a United Nations General Assembly resolution provided for the creation of an "Arab State" and a "Jewish State" to exist within Palestine in the United Nations Partition Plan for Palestine. This has been described by Prof. Joseph Massad as "a non-binding proposal that was never ratified or adopted by the Security Council, and therefore never acquired legal standing, as UN regulations require."[22] The Jewish Agency, precursor to the Israeli government, agreed to the plan, but the Palestinians rejected this and fighting broke out. After Israel's May 14, 1948 unilateral declaration of independence, support from neighboring Arab states escalated the 1947–48 Civil War in Mandatory Palestine into the 1948 Arab-Israeli War. The legal and territorial status of Israel and Palestine is still hotly disputed in the region and within the international community.

In June 2009 Barack Obama said "Israelis must acknowledge that just as Israel's right to exist cannot be denied, neither can Palestine's."[23]

As reported by the New York Times, in 1988 Yasser Arafat declared that the Palestinians accepted United Nations Security Council Resolutions 242 and 338, which would guarantee "the right to exist in peace and security for all".[24] In 1993, there was an official exchange of letters between Israeli Prime Minister Yitzhak Rabin and Chairman Arafat, in which Arafat declared that "the PLO affirms that those articles of the Palestinian Covenant which deny Israel's right to exist, and the provisions of the Covenant which are inconsistent with the commitments of this letter are now inoperative and no longer valid."[17]

In 2011, Palestinian Authority President Mahmoud Abbas said in a speech to the Dutch parliament in the Hague that the Palestinian people recognize Israel's right to exist and they hope the Israeli government will respond by "recognizing the Palestinian state on the borders of the land occupied in 1967."

Israeli government ministers Naftali Bennett and Danny Danon have repeatedly rejected Palestine's right to exist, with Bennett stating "I will do everything in my power to make sure they never get a state.".[25][26] In an August 2011 interview with Teymoor Nabili on Al Jazeera English, Danny Danon said "There is place only for one state on the land of Israel.... I do not believe in a two-state solution.",[27] reaffirming his stance in June 2013: “Oy vey! Is it such a criminal offense to oppose a two-state solution?”[28]

Abbas defended the decision to seek unilateral recognition of a Palestinian state at the United Nations by saying that the decision to do this was made only after the Israeli government refused "the terms of reference of the peace process and the cessation of settlement building" in the occupied territories.[29]

Criticism of the concept

According to the linguist Noam Chomsky, the term "right to exist" is unique to the Israeli–Palestinian conflict: "No state has a right to exist, and no one demands such a right....In an effort to prevent negotiations and a diplomatic settlement, the U.S. and Israel insisted on raising the barrier to something that nobody's going to accept....[Palestinians are] not going to accept...the legitimacy of their dispossession."[30] John V. Whitbeck argued that Israel's insistence on a right to exist forces Palestinians to provide a moral justification for their own suffering.[31] Journalist and author Alan Hart has argued that there is no legitimacy to Israel’s claim to a “right to exist” in International law. He reasons that Israel therefore insists the Palestinians must first recognise its 'right to exist' on Palestinian territory because according to International law, neither the British Balfour declaration, nor the vitiated UN resolution of 1947 granted that legitimacy and only the dispossessed Palestinians can confer it upon Israel: "Israel has no right to exist unless it was recognized and legitimized by those who were dispossessed of their land and their rights during the creation of the Zionist state." [32]

The right to exist of Armenia became known as the Armenian Question during the Congress of Berlin in 1878, and would again be asked during the Armenian Genocide in World War I.[33]

According to Basque nationalists, "Euzkadi (the name of our country in our own language) is the country of the Basques with as such right to exist independently as a nation as Poland or Ireland. The Basques are a very ancient people..."[34]

The phrase, "right to exist" has also been used in reference to the right of Chechens (in the eyes of supporters) to establish a state independent from Russia.[35][36]

Representatives of the Kurdish people regularly assert their right to exist as a nation.[37][38][39]

The constitution of the Irish free state claimed the national territory consisted of the whole of the Island, denying Northern Ireland's right to exist.[40]

Supporters of an autonomous Novorossiya in eastern Ukraine equally argue for a Novorossiyan right to exist. Due to ongoing media controversy around the driving forces behind the unrest in Ukraine, however, the term carries significant weight. RT News reported in December 2014 that Soika, a self-professed 23-year old Slovak volunteer who had then been in Donbass for two months, told them: "Novorossiya has the right to exist. Although Europe declares the rights of peoples, it recognizes them in a selective manner."[41] Euromaidan generally sees the state not as a grassroots movement, but rather as Russian-backed astroturfing.