Robert Bruce "Bob" Atwood (March 31, 1907 – January 10, 1997) was the long-time editor and publisher of the Anchorage Times, and a proponent of Alaska statehood.

Robert Bruce Atwood, known as Bob Atwood or Robert Atwood, was born March 31, 1907 in Chicago, Illinois. He graduated from Clark University, and in 1932, married social worker Evangeline Rasmuson. They had two daughters, Marilyn and Elaine. 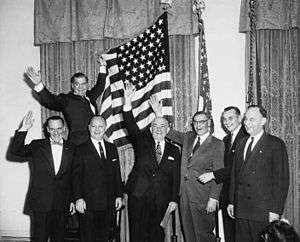 Atwood moved to Anchorage, Alaska in 1935. With the help of his father-in-law, he purchased the struggling Anchorage Daily Times. Under his guidance, it became Alaska's largest daily newspaper.

In 1949, the Alaska Territorial Legislature formed the Alaska Statehood Committee, appointing Atwood as Chairman. His pro-statehood lobbying efforts included visits to Washington, D.C. and a steady stream of articles in his newspaper, such as a 1955 editorial where he argued that whereas commonwealth status was "wonderful" for Puerto Rico, "it wouldn't give Alaskans self-government, control of resources, tax exemptions or any of a number of benefits claimed by its supporters here."

In 1954, Atwood partnered with brother-in-law Elmer E. Rasmuson to invest in the lease of potential oil fields on the Kenai Peninsula. The investment was to yield a fortune after Richfield Oil (merged into ARCO in 1966) discovered oil in 1957 near the Swanson River.

On June 30, 1958, the United States Senate passed the bill admitting Alaska into the Union. Atwood's Anchorage Daily Times celebrated with a headline in six-inch type: “WE’RE IN.”

On January 3, 1959, Atwood was present (along with Senators Edward L. Bartlett and Ernest Gruening, Representative Ralph J. Rivers and Territorial Governors Waino Hendrickson and Michael Anthony Stepovich) in the White House Cabinet Room when President Dwight Eisenhower signed the proclamation that made Alaska the 49th state admitted into the United States.

In 1962, Atwood endowed the Atwood Foundation to promote education and the arts. In 1979, he established the Atwood Chair of Journalism at the University of Alaska Anchorage.

In 1987, Atwood's wife, Evangeline Rasmuson Atwood, died. The Alaska Center for the Performing Arts was constructed in 1989, with the largest performance space designated as the Evangeline Atwood Concert Hall.

In 1990, Robert Atwood stepped down as editor and sold the Anchorage Times (as the Anchorage Daily Times had been renamed) to Bill Allen of petroleum services giant VECO.

In 1998, the Robert B. Atwood Building at 550 W. Seventh Avenue in Anchorage was named by the Alaska State Legislature. The Atwood name also appears in the Atwood Center at Alaska Pacific University.