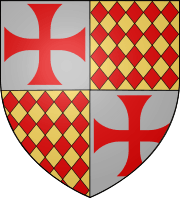 Robert de Craon or Robert Burgundio (died 13 January 1147) was the second Grand Master of the Knights Templar from June 1136 until his death. He was a member of the Craon family, son of Renaud le Bourguignon and Ennoguen de Vitré.[1]

Robert was born around the turn of the 12th century, the youngest of the three sons of Renaud de Craon.[2] He settled in Aquitaine and was engaged to the daughter of the lord of Angoumois, but gave up his wedding and travelled to Palestine after learning of the foundation of the Templar Order by Hughes de Payens. He soon showed his military valour and his piety, and in 1136, after the death of Hughes, he was chosen as the new Grand Master. He proved to be a brilliant organizer and legislator, and turned the Order into a major force in the Crusader states. On March 29, 1139, Pope Innocent II issued the bull Omne Datum Optimum, which exempted the order from tithes and made them independent of any ecclesiastical jurisdiction. The Templars were also granted the habit of a red cross over a white tunic, which has since become the popular image of any crusader.

He was less fortunate as a military leader. As soon as he had been elected, he defeated Zengi, the emir of Aleppo and let his knights plunder the enemy camp; Zengi returned and destroyed the unorganized pillagers. Robert authorized the Spanish Templars to lead a naval expedition of about 70 ships against Lisbon, but this also ended in defeat. In 1140 the Templars resisted a numerically superior Turkish army at the Battle of Tecua. In 1143, after protracted negotiations between Raymond Berenguer IV (the Count of Barcelona and a Templar) the order's mission on the Iberian peninsula was defined. According to William of Tyre, Robert participated in the Council of Acre during the Second Crusade in 1148, but according to the Obituary of Reims, he died in January 1147, and was succeeded by Everard des Barres in April that year. Some authors give a date of death of 13 January 1147.[3]