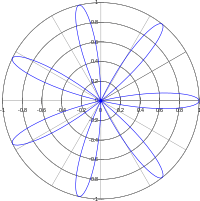 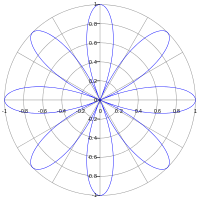 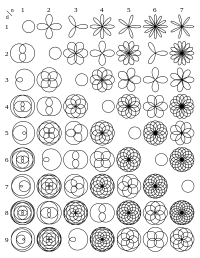 , for various values of k=n/d.

In mathematics, a rose or rhodonea curve is a sinusoid plotted in polar coordinates.

Up to similarity, these curves can all be expressed by a polar equation of the form

or, alternatively, as a pair of Cartesian parametric equations of the form

If k is an integer, the curve will be rose-shaped with

If k can be expressed as n±1/6, where n is a nonzero integer, the curve will be rose-shaped with 12k petals.

, the curves given by the polar equations

are identical except for a rotation of π/2k radians.

Rhodonea curves were named by the Italian mathematician Guido Grandi between the year 1723 and 1728.[2]

A rose whose polar equation is of the form

where k is a positive integer, has area

if k is even, and

The same applies to roses with polar equations of the form

since the graphs of these are just rigid rotations of the roses defined using the cosine.

How the parameter k affects shapes

When d is a prime number then n/d is a least common form and the petals will stretch around to overlap other petals. The number of petals each one overlaps is equal to the how far through the sequence of primes this prime is +1, i.e. 2 is 2, 3 is 3, 5 is 4, 7 is 5, etc.

If d is not prime and n is not 1, then it will appear as a series of interlocking loops.

If k is an irrational number (e.g.

, etc.) then the curve will have infinitely many petals, and it will be dense in the unit disc. 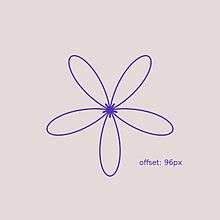 Adding an offset parameter c, so the polar equation becomes

alters the shape as illustrated at right. In the case where the parameter k is an odd integer, the two overlapping halves of the curve separate as the offset changes from zero.

This article is issued from Wikipedia - version of the 6/25/2016. The text is available under the Creative Commons Attribution/Share Alike but additional terms may apply for the media files.