The development of music in the Royal Marines is inextricably linked with the evolution of British military bands. Lively airs and the beat of the drum enabled columns of marching men to keep a regular step. The drum was the normal method of giving signals on the battlefield or in camp. As long ago as the days of Drake and Hawkins the drummer's rhythm would advertise the changing watches or beat the men to quarters.

Without doubt, groups of musicians existed in the Service before 1767, when Royal Marines Divisional Bands were formed at the naval dockyard-bases of Chatham, Plymouth and Portsmouth and the naval gathering-point of Deal in the Downs, and Marine bands (along with professional bands paid for by captains) plus their respective corps of drums provided music on board ships before and during battles of the Napoleonic Wars (e.g. during the long sail into action at the Battle of Trafalgar). The modern history of the Service, though, begins late in the 19th century, when the task of forming a Royal Naval School of Music to provide Bands for the Royal Navy was assigned to the Marines, with the school being founded in 1903. From then on the Band Service became an integral part of the Corps. Its original home was Eastney Barracks, Portsmouth; where it remained until 1930 when it was transferred to the Royal Marine Depot, Deal.

By the end of World War II, 225 musicians and buglers had been killed in action, which was a quarter of their strength at the time, and the highest percentage of any branch of any service, after Bomber Command. After the outbreak of World War II, the service moved to Malvern, then divided with the Junior Wing moving to the Isle of Man and the Senior Wing to Scarborough.

The bands reunited at Burford in 1946 and finally returning to Deal in 1950. The amalgamation of the Divisional Bands with the Royal Naval School of Music to form today's Royal Marines Band Service, also took place in 1950 when the headquarters and training establishment were renamed the Royal Marines School of Music.

The Band Service are notable for performing the theme music from Gerry Anderson's successful 1965 TV series Thunderbirds, in the final scene from his 1966 film Thunderbirds Are GO. The band performed the music on the parade ground of The Royal Marines Depot, Deal, where they marched under the leadership of their Corps Drum Major WO2 Bowden. This sequence was synchronized with the end credits of the film, with the very last scene of this shot (and indeed, the whole film) showing the band standing in a large representation of the words 'THE END'.

At approximately 8.20 am on 22 September 1989, the Royal Marines School of Music at the Royal Marine Depot, Deal was bombed by the IRA; this resulted in the death of eleven Royal Marines Musicians - Musn Mick Ball, B/Cpl John (Andy) Cleatheroe, B/Cpl Trevor Davis, Musn Richard Fice, Musn Richard (Taff) Jones, B/Cpl Dave McMillan, Musn Chris Nolan, B/Cpl Dean Pavey, Musn Mark Petch, Musn Tim Reeves and Musn Bob Simmonds plus the injury of 22 other Royal Marine Band Service members. A memorial garden is now situated in the grounds of the old barracks where the bomb went off. This was built in remembrance of the eleven who died and was restored after an arson attack some years later. Every year the families and friends of those that died join together at the garden to pay their respects and lay flowers in a memorial service.

In 1992 the band was opened to women when the Royal Navy began to fully integrate women (who were then members of a separate branch) into the Service. In April 1996, the School of Music was moved to Portsmouth dockyard when the Deal Barracks were closed. It was initially housed at the former Royal Naval Detention Quarters — the cells were converted to individual practice rooms — but moved out less than a year later when it was acquired by English Heritage due to his architectural heritage and later designated a Grade II listed building.[1][2]

Band of HM Royal Marines HMS Collingwood were present on the Isle of Man for the Tynwald Day ceremony on Monday July 6th 2015.

At present, there are a total of five Royal Marine Bands and Corps of Drums:

The Band of the Royal Marines School of Music in Portsmouth (The Training Band) brings the total number to six.

The Royal Marines ranking structure is used, with "band" prefixed to the rank (e.g. Band Corporal, abbreviated B/Cpl); as with other bands of the British Armed Forces, the rank of Private is replaced with Musician. They wear the same badges of rank as all other Royal Marine officers, warrant officers and NCOs but wear a "Royal Marines Band Service" badge in place of the commando flash and other Band Service insignia indicating their status as musicians. The Portsmouth band and CTCRM band have different cap badges to the rest of the Corps.[3][4] 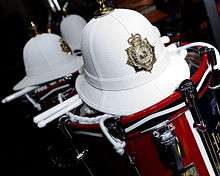 Helmets and drums of the Royal Marines Band Service.

The Royal Marines School of Music (RMSoM) was originally founded as the "Royal Naval School of Music" in 1903 at Eastney Barracks, Portsmouth, where the Royal Marines Museum is now located. In 1930 it moved to Deal, Kent, a historic Royal Navy base and shipyard. Between 1940 and 1950, it moved to various locations around the country before returning to Deal. Eleven band members at the school were killed during the Deal barracks bombing of 1989. The school relocated for the last time in 1996 and returned to Portsmouth, making its home in the former detention quarters within HMS "Nelson"[5]

Today all Royal Marines Bands are required to provide every imaginable musical ensemble including wind bands, orchestras, quartets and dance bands, as well as traditional Military (parade) Bands. To achieve this, all RM musicians, except solo specialists, are required to attain an above-average standard on both a string and a wind instrument. As a result of this special versatility, Royal Marines musicians are recognised around the world as being both thoroughly professional and highly talented within the military musical world, and the music world generally. The "Solo Specialists" have to become exceptionally highly talented on their chosen single instrument. The Corps of Drums receive an equally thorough training and pride themselves on maintaining the highest standards of drill, bugling and drumming. Their glittering presence at the front of all Royal Marines Bands on the march gives the bands a visual impact that is second to none. The Drum Majors are selected from the Corps of Drums.

After completing 15 weeks of initial military training, now mostly held at the Commando Training Centre Royal Marines, and passing the audition, musicians proceed to train at the RMSoM. Musicians train for a maximum of 3 years and buglers train for 2 years. RMSoM has a collabrotive agreement with Plymouth University through which musicians may obtain a BMus degree.[6] More experienced musicians have an opportunity to obtain a master's degree and other civilian certifications through external providers.

As their careers progress, Musicians and Buglers may return to the Royal Marines School of Music to undergo further musical training to qualify them for higher rank, after passing the Junior Command Course (to become Band Corporal) and Senior Command Course (to become Band Sergeant). This culminates in a possible place on the Bandmasters' Course that is widely recognized as one of the most demanding courses of its type, lasting 12 months.

Bandmaster Students study all the main music disciplines; the orchestral and contemporary wind band repertoire and they work with renowned figures from the world of music.

In addition to music making, Royal Marines Musicians and Buglers are fully trained and operational military personnel and usually perform support duties such as logistics and medical personnel and drivers. Additionally they may also provide entertainment for troops deployed overseas and represent the Royal Marines in an ambassadorial role.

Band members have traditionally been deployed on board Royal Navy ships and this custom continued until 1978. Bandsmen saw action during both the First and Second World Wars.[5] By the end of World War II, 225 musicians and buglers had been killed in action, which was a quarter of their strength at the time, and the highest percentage of any branch of any service. Royal Marines Bands also were involved in both the Falklands conflict and Operation Granby (Gulf War 1) as casualty handlers on various hospital ships.

In 2000, RM Band Service ranks deployed to Kosovo for six months during Operation Agricola supporting 3 Commando Brigade RM. During the firemen's strike (Operation Fresco) in 2002-03, 150 Band Service ranks were deployed with 'Green Goddesses' to various Temporary Service Fire Stations around the UK. Despite this, the annual Mountbatten Festival of Music went ahead in 2003 although with very reduced numbers. In the early part of 2003, 39 Band Service ranks deployed with the Primary Casualty Receiving Facility on RFA Argus providing casualty handlers and a further 26 ranks deployed with 3 Commando Brigade as Decontamination teams during Operation Telic (Gulf War 2). Sunday 1 April 2007 marked a significant milestone for the Royal Marines Band Service as they took over the duties as the Cyprus Reinforcement Unit for two months. Ninety ranks deployed. This was the first time in the history of the Royal Marines Band Service that Musicians and Buglers had been deployed in company strength as an independent military unit to perform their secondary role. Also in 2007, a number of the band took part in operations in Afghanistan with 3 Commando Brigade where they assisted the Medical Squadron and the Commando Logistic Regiment, as well as providing musical entertainment. Another 38 deployed to Afghanistan again in 2008/9 with 3 Commando Brigade as ambulance and general duties drivers. Royal Marines Bands continue to fly the flag abroad with many prestigious engagements undertaken including 60th Anniversary of D-Day, Gibraltar, the USA, Europe and Australia.

The Royal Naval Volunteer Bands are part of the RMBS, these bands are assigned in various Royal Navy installations all over the UK and are staffed by a wide variety of volunteer Military Musicians. They come from many walks of life: serving or retired members of any of the Crown Services, retired military Bandsmen or civilian personnel who wish to help and support the Armed Forces<JSP 813>. It is a uniformed organisation wearing a "rig" similar to a Royal Naval Senior Rating, or the uniform of their parent service. The Volunteer Bands provide musical support to augment the Royal Marine Band Service and the wider aims of the UK military mission. Most bands can mount a marching band display and have a Corps of Drums. Volunteer Bands are directed and led, usually, by a serving RMBS Colour Sergeant. Bands are run by a Volunteer Band Instructor and a Volunteer Band Officer, a member who is serving above the rank of Warrant Officer.

Bands are located at: