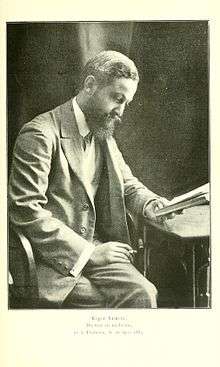 Ruggero Verity (20 May 1883 – 4 March 1959) was an Italian entomologist who specialised in butterflies and a physician.

Roger Verity was a lepidopterist and the author of over 150 papers and books including Rhopalocera Palaeartica. Papilionidae and Pieridae (1905-1911, 454 pages), Le Farfalle diurne d’Italia (Butterflies of Italy (volumes, 1940-1953, 1688 pages) and Les variations géographiques et saisonnières des Papillons diurnes en France (Geographic and seasonal variation of the butterflies of France) (three volumes, 476 pages). He was responsible for the naming of two to three thousand butterflies, his collection of close to 250,000 butterflies together with his library is now in La Specola museum in Florence.

He lived in Florence and at Cicaleto (Villa Verity) at Caldine, He died 4 March 1959 and is buried at Sofiana. There is a memorial in the family chapel at Cicaleto.

Roger Verity created the term exerges, writing: "[Exerges] always inhabit different land-areas, except in particular cases, such as large mountain chains and plains, which afford very different surroundings and climates within the same area; they often consist in a long chain of races stretching even from one continent to another ..." The modern term is cline.