SEC Office of the Whistleblower 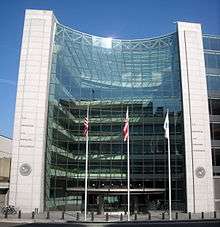 US Security and Exchange Commission Office, in Washington, D.C., near Union Station.

Symbol of the SEC Office of the Whistleblower

The U.S. Securities and Exchange Commission (SEC) whistleblower program went into effect on July 21, 2010, when the President signed into law the Dodd-Frank Wall Street Reform and Consumer Protection Act. The same law also established a whistleblower incentive program at the Commodity Futures Trading Commission, which is run by former senior SEC enforcement attorney[1] Christopher C. Ehrman.[2][3] The program rewards people who submit tips related to violations of the Commodity Exchange Act.[4] The SEC can make awards ranging from 10 to 30 percent of the monetary sanctions collected, which are paid from its Investor Protection Fund.

While the SEC had in place a bounty program for more than 20 years to reward whistleblowers for insider trading tips and complaints, an Office of the Inspector General's 2013 report found the Commission had received very few applications from individuals seeking a bounty, and there were very few payments made under the program, possibly because the program was not widely recognized. The report also determined the program was not well-designed.[5] The former Chief of the Office of the Whistleblower Sean McKessy left the agency in July 2016 after serving for five years and later joined a whistleblower law firm.[6][7] On January 17, 2012, the SEC whom had then named Jane A. Norberg to the Office’s Deputy Chief roll.[8] Jane A. Norberg took over for the departing Sean McKessy departed in July 2016.[9] when it was announced that Sean McKessy, Chief of Whistleblower Office Leave his office.[10] The SEC named Jane A. Norberg Chief of the Office of the Whistleblower on September 28, 2016.[11]

Former director Sean McKessy once said he understood the public's skepticism about the program. "I view it as already having been a very significant success, but I understand that people want to see the deliverable. And the deliverable, in our view, is paying people for good information," he said. He added that he welcomes the opportunity to make payouts: "The more, the better, obviously. The higher the amounts, the better," he said.[12] "We are likely to see more awards at a faster pace now that the program has been up and running and the tips we have gotten are leading to successful cases," McKessy told the Wall Street Journal in June 2013.[13]

SEC Chair Mary Jo White called the whistleblower program a "game changer," in an April 2015 speech. "The program is a success – and we will work hard at the SEC to build on that success," she said.[14]

On December 12 of 2015 a anonymous party filed the first petition for a writ of mandamus in John Doe v. SEC[15] the motion is a rarely used motion that asks for intervention of the United States Court of Appeals for the District of Columbia Circuit into the SEC negligent operation in dealing with the claim. The motion claims that the SEC whistleblowers office had been negligent in a case originally posted as available for reward in 2012, the motion goes on to state that the anonymous petitioner claims applied for the reward in October 2012 and three years later there had been no preliminary determination made in the case USCA #15-1444.[16] the petition went into detailed facts about the backlog of the program, and was highly redacted. It was later rendered as moot [17] when the SEC issued an award to the anonymous party.

OMI triages all Tips, Complaints, and Referrals received by Enforcement. When Office of Market Intelligence determines a complaint warrants further investigation, OMI assigns the complaint to one of the SEC's 11 regional offices, an Enforcement specialized unit, or an Enforcement Associate Director group located in the SEC's Headquarters. When it is determined that a complaint does not warrant further investigation or the complaint does not fall into Enforcement’s priorities, Office of Market Intelligence will designate the complaint as No Further Action. No Further Actions get a second review before a final decision is made to close the complaint. In some cases NFAs may be referred to an external government agency or other agency for action. On occasion the Office of the Whistleblower Chief will determine On occasion the Office of the Whistleblower Chief will determine that a whistleblower Tips, Complaints, and Referrals is sufficiently specific, timely and credible which results in the Tips, Complaints, and Referrals being expedited through the triage process and assigned to investigative staff by Office of Market Intelligence.[5]

Furthermore, Office of the Whistleblower documents information needed to process whistleblower awards. The office conducts quarterly conference calls with investigative staff to reconcile items that are tracked, with work that is assigned and resourced, and to discuss the quality of each whistleblower complaint.[5]

A whistleblower complaint results in a successful action against a defendant if the monetary sanctions:

Phase 3 – Claim for an award

Whistleblowers receive their awards from the Securities and Exchange Commission Investor Protection Fund, established pursuant to Section 922 of the Dodd-Frank Act.[5]

After the final order has been issued, if a whistleblower has gotten an award that falls between 10 and 30 percent of the monetary sanctions collected in the action, the process is complete and the amount is not subject to appeal. However, if the whistleblower did not receive an award, or the award percentage is outside the statutory 10 to 30 percent that is collected from an action, the whistleblower may appeal the decision at the Federal Court of Appeals level. The Office of the General Counsel handles these appeals for the Commission.[5]

Whistleblower awards are paid out of the Investor Protection Fund that was established in the Dodd-Frank Act. Payments from the IPF are made through the SEC’s Office of Financial Management and are based on amounts that were collected from each individual case. A single payment can be made to the whistleblower if all monies are collected at the time the final order is issued, or the payment can occur on a rolling basis if the monies are collected over time, after the final order is issued.[5]

To file a claim for a whistleblower award, one must file Form WB-APP, Application for Award for Original Information Provided Pursuant to Section 21F of the Securities Exchange Act of 1934.[5]

Updating whistleblowers about the status of their applications

Below are the ways SEC Office of the Whistleblower communicates with whistleblowers after they submit an award application to the SEC:

Office of the Inspector General Evaluation

In the Office of the Inspector General Evaluation of the SEC's Whistleblower Program, January 18, 2013, the program was outlined by the Inspector General, providing some insight into its inner workings. Section 922 of the Dodd-Frank Wall Street Reform and Consumer Protection Act (Dodd-Frank), amended the Securities Exchange Act of 1934 (Exchange Act) by adding Section 21F, "Securities Whistleblower Incentives and Protection." Section 21F directs the SEC to make monetary awards to eligible individuals who voluntarily provide original information that leads to successful SEC enforcement actions resulting in the imposition of monetary sanctions over $1 million, and certain related successful actions. The SEC can make awards ranging from 10 to 30 percent of the monetary sanctions collected, which are paid from the SEC’s Investor Protection Fund. In addition, Section 924(d) of Dodd-Frank directed the SEC to establish a separate office within the Commission to administer the whistleblower program. In February 2011, the Commission established the Office of the Whistleblower to carry out this function.[5]

On May 25, 2011, the SEC adopted final Regulation 21F to implement the provisions of Section 21F of the Exchange Act. Regulation 21F became effective on August 12, 2011. Among other things, Regulation 21F defines terms that are essential to the whistleblower’s program operations, establishes procedures for submitting tips and applying for awards, including appeals of SEC determinations, and whether and to whom to make an award; describes the criteria the SEC will consider in making award decisions, and implements Dodd-Frank’s prohibition against retaliation for whistleblowing.[5]

Use of the Investor Protection Fund

In 2012, the Investor Protection Fund was used to pay one whistleblower award which amounted to approximately $46,000. As mentioned, the fund is also used to pay for OIG’s employee suggestion-program activities which amounted to $112,000 in fiscal year 2011 and $70,000 in fiscal year 2012. Even though some expenditures were paid from the fund, its balance has not substantially changed since the fund was established.[5]

Establishment of the fund

The Investor Protection Fund was established in the fourth quarter of fiscal year 2010 to be available to the U.S. Securities and Exchange Commission, without further appropriation or fiscal year limitation for paying awards to whistleblowers and funding the work activities of Office of Inspector General’s employee suggestion program.[5]

The Investor Protection Fund was established in August 2010 with approximately $452 million of non-exchange revenue that was transferred to the fund from the U.S. Securities and Exchange Commission’s disgorgement and penalties deposit fund.[5]

If the Investor Protection Fund balance drops below $300 million, Enforcement will replenish it by identifying qualifying receipts for deposit.[5]

The fund earns interest through short-term investments with the Bureau of Public Debt.[5]

There are nine exemptions to the Freedom of Information Act, which the SEC and other federal agencies can use to deny the release of certain information which the public may request. Exemption 3, 5 U.S.C. Section 552(b)(3)(B) or (b)(3) pertains to information that is prohibited from disclosure by another federal law.[5]

The following are some related SEC forms: