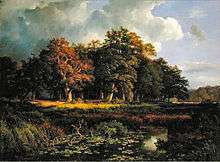 The Sachsenwald in the 19th century. Painting by Adolph Friedrich Vollmer (1852)

The Sachsenwald is a forest near Hamburg, Germany. It is an unincorporated area in the amt Hohe Elbgeest. It derives its name, which is in English: Saxon wood, from being located in the former Duchy of Saxe-Lauenburg, earlier also called Lower Saxony, now mostly covered by the District Herzogtum Lauenburg (Duchy of Lauenburg). The Sachsenwald has an area of 68 km2. It was given to Otto von Bismarck in 1871 for his achievements for Germany.