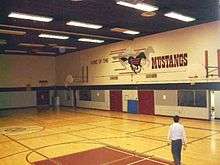 Inside the gymnasium of the old Saint Michael location 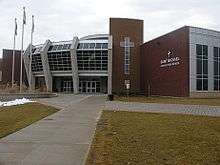 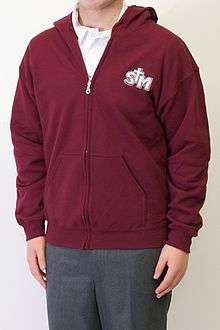 A common style of uniform worn by students

Saint Michael Catholic High School is a Catholic high school in Niagara Falls, Ontario. It serves 940 pupils in grades 9-12 and is governed by the Niagara Catholic District School Board. Saint Michael opened in 1989 and moved to its current building in 2004.

Saint Michael Catholic High School officially opened its doors on September 5, 1989 in its original location on 6009 Valley Way. At that time the school had 248 students, including over 50 students that transferred from Saint Paul Catholic High School. The current Saint Michael building opened on April 16, 2004, after the original building fell into disrepair; the new building originally housed 800 students. Today 6009 Valley Way is occupied by Glengate Alliance Church. The only thing that remains of the old faculty is the lockers, gym and the white cross that was installed in 1989. From the years 2012-2015 the new location had been renovated for the construction of an addition that would add more indoor classrooms to replace the current mobile classrooms that required students to go outside to get to their classroom. This addition allegedly cost a total of around five million dollars.