For other uses, see Pachomius (disambiguation).

Saint Pachomius (Greek: Παχώμιος, Coptic: Ⲡⲁϩⲱⲙ ca. 292–348), also known as Pachome and Pakhomius (/pəˈkoʊmiəs/), is generally recognized as the founder of Christian cenobitic monasticism. Coptic churches celebrate his feast day on 9 May, and Eastern Orthodox and Roman Catholic churches mark his feast on 15 May[1] or 28 May.[2] In the Lutheran Church, the saint is remembered as a renewer of the church, along with his contemporary (and fellow desert saint), Anthony of Egypt on January 17.

Saint Pachomius was born in 292 in Thebes (Luxor, Egypt) to pagan parents.[3] According to his hagiography, at age 21, Pachomius was swept up against his will in a Roman army recruitment drive, a common occurrence during this period of turmoil and civil war. With several other youths, he was put onto a ship that floated down the Nile and arrived at Thebes in the evening.[4] Here he first encountered local Christians, who customarily brought food and comfort daily to the impressed troops. This made a lasting impression, and Pachomius vowed to investigate Christianity further when he got out. He was able to leave the army without ever having to fight, was converted and baptized (314).

Pachomius then came into contact with several well known ascetics and decided to pursue that path under the guidance of the hermit named Palaemon (317). One of his devotions, popular at the time, was praying with his arms stretched out in the form of a cross.[4] After studying seven years with Palaemon, Pachomius set out to lead the life of a hermit near St. Anthony of Egypt, whose practices he imitated until Pachomius heard a voice in Tabennisi that told him to build a dwelling for the hermits to come to.[5] An earlier ascetic named Macarius had created a number of proto-monasteries called lavra, or cells where holy men would live in a community setting who were physically or mentally unable to achieve the rigors of Anthony's solitary life.

Pachomius established his first monastery between 318 and 323 at Tabennisi, Egypt.[6] His elder brother John joined him, and soon more than 100 monks lived nearby. Pachomius set about organizing these cells into a formal organization. Until then, Christian asceticism had been solitary or eremitic with male or female monastics living in individual huts or caves and meeting only for occasional worship services. Pachomius created the community or cenobitic organization, in which male or female monastics lived together and held their property in common under the leadership of an abbot or abbess. Pachomius realized that some men, acquainted only with the eremitical life, might speedily become disgusted if the distracting cares of the cenobitical life were thrust too abruptly upon them. He therefore allowed them to devote their whole time to spiritual exercises, undertaking all the community's administrative tasks himself. The community hailed Pachomius as "Abba" (father), from which "Abbot" derives.

The monastery at Tabennisi, though enlarged several times, soon became too small and a second was founded at Pabau (Faou).[5] After 336, Pachomius spent most of his time at Pabau. Though Pachomius sometimes acted as lector for nearby shepherds, neither he nor any of his monks became priests. St Athanasius visited and wished to ordain him in 333, but Pachomius fled from him. Athanasius' visit was probably a result of Pachomius' zealous defence of orthodoxy against Arianism.[4] Basil of Caesarea visited, then took many of Pachomius' ideas, which he adapted and implemented in Caesarea. This ascetic rule, or Ascetica, is still used today by the Eastern Orthodox Church, comparable to that of the Rule of St. Benedict in the West. 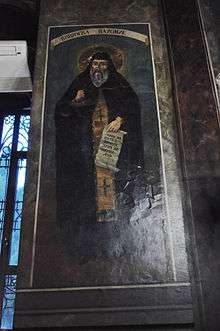 Painting of Pachomius the Great in the Curtea Veche, Bucharest.

Pachomius continued as abbot to the cenobites for some forty years. During an epidemic (probably plague), Pachomius called the monks, strengthened their faith, and appointed his successor. Pachomius then died on 14 Pashons, 64 A.M. (9 May 348 A.D.)

By the time Pachomius died (c. 345) eight monasteries and several hundred monks followed his guidance.[6] Within a generation, cenobic practices spread from Egypt to Palestine and the Judean Desert, Syria, North Africa and eventually Western Europe.[7] The number of monks, rather than the number of monasteries, may have reached 7000.[8][9]

His reputation as a holy man has endured. As mentioned above, several liturgical calendars commemorate Pachomius. Among many miracles attributed to Pachomius, that though he had never learned the Greek or Latin tongues, he sometimes miraculously spoke them.[4] Pachomius is also credited with being the first Christian to use and recommend use of a prayer rope.

Examples of purely Coptic literature are the works of Abba Antonius and Abba Pachomius, who spoke only Coptic, and the sermons and preachings of Abba Shenouda, who chose to write only in Coptic.

The name of the saint is of Coptic origin:[10]

p- at the beginning is the Coptic definite article). Into Greek it was adopted as Παχούμιος and Παχώμιος. By Greek folk etymology it was sometimes interpreted as "broad-shouldered" from παχύς "thick, large" and ὦμος "shoulder".