Sapere aude is the Latin phrase meaning “Dare to know”; and also is loosely translated as “Dare to be wise”, or even more loosely as "Dare to think for yourself!". Originally used in the First Book of Letters (20 BCE), by the Roman poet Horace, the phrase Sapere aude became associated with the Age of Enlightenment, during the 17th and 18th centuries, after Immanuel Kant used it in the essay, “Answering the Question: What Is Enlightenment?” (1784). As a philosopher, Kant claimed the phrase Sapere aude as the motto for the entire period of the Enlightenment, and used it to develop his theories of the application of Reason in the public sphere of human affairs.

In the 20th century, in the essay “What is Enlightenment?” (1984) Michel Foucault took up Kant's formulation of “dare to know” in an attempt to find a place for the individual man and woman in post-structuralist philosophy, and so come to terms with the problematic legacy of the Enlightenment. Moreover, in the essay The Baroque Episteme: the Word and the Thing (2013) Jean-Claude Vuillemin proposed that the Latin phrase Sapere aude be the motto of the Baroque episteme.[1]

The original use of the phrase Sapere aude appears in the First Book of Letters (20 BCE), by the Roman poet Horace; in the second letter, addressed to Lolius, in line 40, the passage is: Dimidium facti, qui coepit, habet; sapere aude, incipe. (“He who has begun is half done; dare to know; begin!”).[2]

The phrase is the moral to a story, wherein a fool waits for a stream to cease flowing, before attempting to cross it. In saying, "He who begins is half done. Dare to know, dare to begin!", the Roman poet Horace suggests the value of human endeavour, of persistence in reaching a goal, of the need for effort to overcome obstacles. Moreover, the laconic Latin of Sapere aude also can be loosely translated as the English phrase “Dare to be wise”.

In his inaugural address as Professor of Greek in Wittenberg on August 29, 1518, Philip Melanchthon quoted Horace's letter. 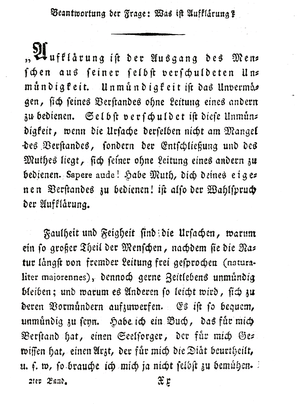 Answering the Question: What is Enlightenment?, by Immanuel Kant.

In the essay, “Answering the Question: What Is Enlightenment?” (1784), Immanuel Kant describes the Age of Enlightenment as “Man’s release from his self-incurred tutelage”; and, with the phrase Sapere aude, the philosopher charges the reader to follow such a program of intellectual self-liberation, by means of Reason. The essay is Kant's shrewd, political challenge to men and women, suggesting that the mass of “domestic cattle” have been bred, by unfaithful stewards, to not question what they have been told about the world and its ways.

Kant classifies the uses of reason as public and private. The public use of reason is discourse in the public sphere, such as political discourse (argument and analysis); the private use of reason is rational argument, such as that used by a person entrusted with a duty, either official or organizational. Skillfully praising King Frederick II of Prussia (r. 1740–86) for his intellectual receptiveness to the political, social, and cultural ideas of the Enlightenment, the philosopher Kant proposes that an enlightened prince is one who instructs his subjects to: “Argue as much as you will, and about what you will, only obey!”

It is the courage of the individual man to abide the advice Sapere aude that will break the shackles of despotism, and reveal, through public discourse, for the benefit of the mass population and of the State, better methods of governance, and of legitimate complaint.[3]

In response to Immanuel Kant's Age of Enlightenment propositions for intellectual courage, in the essay “What is Enlightenment?” (1984), Michel Foucault rejected much of the hopeful politics proposed by Kant: a people ruled by just rulers; ethical leaders inspired by the existential dare advised in the phrase Sapere aude. Instead, Foucault applied ontology to examine the innate resources for critical thinking of a person's faculty of Reason. With the analytical value of Sapere aude reinforced by the concept of “Faithful betrayal” to impracticable beliefs, Foucault disputed the Enlightenment-era arguments that Kant presents in the essay “Answering the Question: What is Enlightenment?” (1784).

Like his 18th-century predecessor, Foucault also based his philosophic interpretation of Sapere aude upon a definite practice of critical thinking that is an “attitude, an ethos, a philosophical life in which [is found] the critique of what we are”. Such an enlightened, intellectual attitude applies reason to experience, and so effects an historical criticism of “the limits that are imposed on us”. The criticism is “an experiment with the possibility of going beyond” imposed limits, in order to reach the limit-experience, which simultaneously is an individual, personal act, and an act that breaks the concept of the individual person.[4]