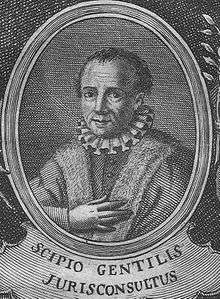 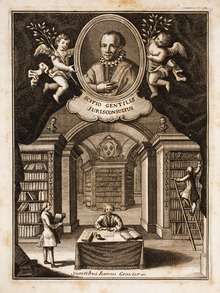 Scipione Gentili (Latin: Scipio Gentilis) (1563 – August 7, 1616) was an Italian law professor and a legal writer. One of his six brothers was Alberico Gentili, one of the father of the international law.

Born at San Ginesio, Scipione Gentili left Italy at the age of 16 when he had to emigrate together with his father and his brother Alberico due to their Protestant beliefs. While his brother and his father settled in England, Scipione spent his life in Germany. He studied law at the universities of Tübingen, Wittenberg, Leiden, Heidelberg and Basel. He reached the doctorate in 1589 and started to teach law at the university of Heidelberg. Due to quarrels with his Italian compatriot Giulio Pace he left Heidelberg and went to the university at Altdorf bei Nürnberg, Germany. There the famous jurist Hugues Doneau (Hugo Donellus, 1527—1591) who had been among his teachers at Leiden procured him a professorship. Scipione kept this office until his death.

While Alberico Gentili was—at least at the outset of his career—a staunch supporter of the traditional bartolist method of legal interpretation, Scipione was influenced by French jurists like Doneau and Jacques Cujas, who applied the methods of humanist philology to legal texts. Gentili's work—which fills eight quarto volumes in the 1763 edition— comprises not only legal writings. He also wrote commentaries on St. Paul's Epistle to Philemon, and on the Apologia of Lucius Apuleius as well as a translation into Latin of and Annotazioni (in Italian) on Torquato Tasso's epic Gerusalemme liberata. Among his legal works are two voluminous treatises De donationibus inter virum et uxorem (on donations between husband and wife, which were illegal and void under Roman law) and De jurisdictione (on jurisdiction). Gentili also edited the final part of Doneau's Commentarii de Iure Civili thereby securing the completion of this influential work which the author had not been able to finish before his death. Gentili rendered a similar service to his brother Alberico whose Hispanica Advocatio he edited in 1613.

During his lifetime Scipione Gentili was held in high esteem all over Europe. His fame probably even surpassed that of his brother. Pope Clement VIII is said to have offered him the possibility to return to Italy and to teach at Bologna without having to give up his Protestant beliefs—an offer which Gentili did not accept. However, after his death, Scipione Gentili was quickly forgotten. Unlike his brother Alberico, who was re-discovered in the 19th century, Scipione Gentili is still waiting for a re-evaluation of his work.