He emerged in the 1970s and at the time he was considered to be one of the few musicians of real talent who carried forward the tradition of the classic jazz tenor saxophone in the style of Ben Webster, Coleman Hawkins, Zoot Sims, and Don Byas. Initially playing in various rhythm & blues outfits in Providence (Rhode Island), he subsequently shifted to jazz and the tenor saxophone. In 1976 he moved to New York City, in part at the recommendation of Roy Eldridge. He toured with Benny Goodman for a period of time and recorded his debut album in 1977 for Concord Records, with whom he maintained a long recording career in his own name and as a member of the Concord Jazz All Stars. He also accompanied singer Rosemary Clooney in the studio and on the road for a decade.

In the early 1980s, he formed his own quintet and toured throughout the world. Free from his drinking habit, in 1982 he matured sufficiently to break away from the strong influence of Ben Webster and Zoot Sims, whom he was accused of imitating. From this point, his playing and tone were very much his own.

Living in New York City, Hamilton toured throughout the world during the 1980s, spending much time playing in Japan and Europe. He was in particular a recurrent visitor to the UK, Sweden, and the Grande Parade du Jazz, held in Nice, France. By the early 1990s he was ready for a next step, and by 1994 when he released Organic Duke, he had developed a singular style: a large, well-rounded but a focused tone and improvising, ostensibly still based on swing (especially Ellington), but incorporating more modern elements. During this period, he relocated to London and formed his current quartet, featuring British musicians John Pearce (p), Dave Green (b) and Steve Brown (dr) with whom he recorded East of the Sun in 1993. (East of the Sun features Brian Lemon on piano, not John Pearce.). He currently is touring throughout Europe.

In 2007 he made a guest appearance at the Brecon Jazz Festival accompanied by Humphrey Lyttelton and his Band. Part of this concert was shown on BBC Four as Humph's Last Stand, a tribute to Lyttelton after his death in 2008.

During 2013 through November 2014, Scott Hamilton has featured prominently with Andrea Motis, Joan Chamorro Quintet, backing the acclaimed Spanish jazz singer with his celebrated tenor saxophone, notably in Spain at Barcelona’s Jamboree Club, but also at other venues in Europe. Hamilton has also featured—alongside Motis and Chamorro—with the San Andreu Jazz Band, a Barcelona-based young jazz musician group, created and directed by Joan Chamorro. 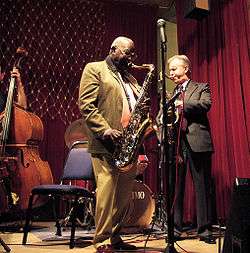 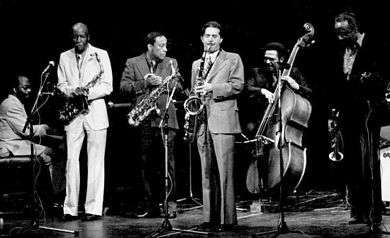 He has recorded over forty albums as a lead including the following on Carl Jefferson's Concord Records label, except where marked.