Scott Jamieson (born 28 November 1983) is a Scottish professional golfer who plays on the European Tour.

Jamieson was born in Glasgow, Scotland. He spent four years playing amateur golf on a scholarship at Augusta State University in the U.S. His amateur career culminated with him representing his country at the Eisenhower Trophy in 2006, the year he turned professional.

After a slow start to his professional career, Jamieson won twice on the third-tier PGA EuroPro Tour in 2009, on his way to topping the Order of Merit;[1] he also recorded four top-20 finishes on the Challenge Tour toward the end of the year, playing off invitations. Jamieson's 2009 performance earned him full Challenge Tour status for 2010, and he produced another successful season: top-20 finishes in his final six tournaments, including a runner-up placing in the Kazakhstan Open, boosted him to 14th in the rankings, and promotion to the European Tour.[2]

Jamieson's rookie year on the European Tour got off to a quick start, as he recorded top-10 finishes in two of his first six tournaments, the Joburg Open in January and the Sicilian Open in March. He then embarked on a golden summer, recording his best European Tour finish with a 3rd place in the Open de España, then matching it in the BMW International Open and the Barclays Scottish Open. The latter of these gave Jamieson his largest payday to date, and qualified him for the first major of his career, the 2011 Open Championship.

Jamieson won for the first time on tour at The Nelson Mandela Championship in December 2012, the first event of the 2013 season. In a tournament heavily affected by rain, with par reduced to 65 and only two rounds possible, he pipped Steve Webster and Eduardo de la Riva on the second hole of a playoff. A month later, he led Volvo Golf Champions by 5 strokes after 3 rounds, but failed to win his second European Tour title, finished 2nd, one stroke behind Louis Oosthuizen.[3] 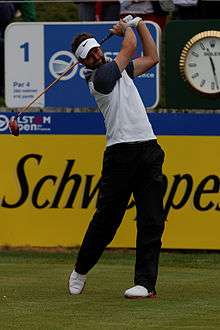 1 Co-sanctioned with the Sunshine Tour

1 Co-sanctioned with the European Tour