In professional sports, scouts are experienced talent evaluators who travel extensively for the purposes of watching athletes play their chosen sports and determining whether their set of skills and talents represent what is needed by the scout's organization. Some scouts are interested primarily in the selection of prospects, younger players who may require further development by the acquiring team but who are judged to be worthy of that effort and expense for the potential future payoff that it could bring, while others concentrate on players who are already polished professionals whose rights may be available soon, either through free agency or trading, and who are seen as filling a team's specific need at a certain position. Advance scouts watch the teams that their teams are going to play in order to help determine strategy.

Many scouts are former coaches or retired players, while others have made a career just of being scouts. Skilled scouts who help to determine which players will fit in well with an organization can be the major difference between success and failure for the team with regard to wins and losses, which often relates directly to the organization's financial success or lack thereof as well.

Scouts tend to have to perform one of two tasks, either scouting opposition teams to research the opposition's players and tactics, or scouting individual players to identify their level of skill and to keep track of potential new signings.[1]

According to Tony Lucadello, considered by some to be the greatest scout ever,[2][3][4][5] the four kinds of scouts start with the letter 'P':

Modern day scouts are becoming more and more reliant on computer programs to aid and assist in the evaluation of talent being scouted. Many professional sport clubs now use computers to organize their collected information and data. Most sports still depend on human management to decide which players their organization will draft or sign. 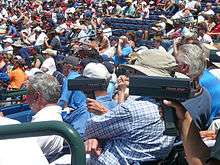 Baseball scouts at a game at Turner Field in 2008.