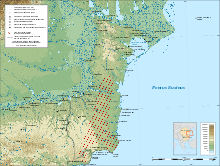 Scythia Minor or Lesser Scythia (Greek: Μικρά Σκυθία, Mikrá Skythia) was in ancient times the region surrounded by the Danube at the north and west and the Black Sea at the east, roughly corresponding to today's Dobrogea, with a part in Romania, a part in Bulgaria.

The earliest description of the region is found in Herodotus, who identified as Scythia the region starting north of the Danube delta. In a 2nd-century BC inscription recording a decree of Histria honouring Agathocles, the region already was named Scythia, while the earliest usage of the name "Scythia Minor" (Mikrá Skythia) in literature is found in Strabo's early 1st-century Geography.

By the 7th century BC, several Greek colonies were built on its Black Sea shore, and the earliest written Greek reports state that the lands were inhabited by Thracians, reidentified in time as Getae and then Dacians. During later times, the area also witnessed Celtic and Scythian invasions. It was part of the kingdom of Dacia for a period, after which the region was conquered by the Roman Empire, becoming part of the province of Moesia Inferior. With Diocletian's reforms, it was split from Moesia as a separate province of "Scythia", being part of the Diocese of Thrace. After the partition of the Empire in 395, the province was retained by the Byzantine Empire. It maintained the name Scythia Minor, until the region's loss during the early 7th century to the migrating Slavs and Bulgars. After that, the classical name fell out of use.

An ancient episcopal see of the late Roman province of Scythia Minor is included in the list of titular sees in the Annuario Pontificio:[1]