Power of a point 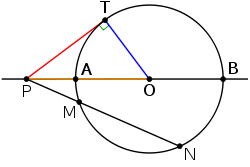 Figure 1. Illustration of the power of point P in the circle centered on the point O. The distance s is shown in orange, the radius r is shown in blue, and the tangent line segment PT is shown in red.

This equality is sometimes known as the "secant-tangent theorem", "intersecting chords theorem", or the "power-of-a-point theorem".

The power of a point is used in many geometrical definitions and proofs. For example, the radical axis of two given circles is the straight line consisting of points that have equal power to both circles. For each point on this line, there is a unique circle centered on that point that intersects both given circles orthogonally; equivalently, tangents of equal length can be drawn from that point to both given circles. Similarly, the radical center of three circles is the unique point with equal power to all three circles. There exists a unique circle, centered on the radical center, that intersects all three given circles orthogonally, equivalently, tangents drawn from the radical center to all three circles have equal length. The power diagram of a set of circles divides the plane into regions within which the circle minimizing the power is constant.

More generally, French mathematician Edmond Laguerre defined the power of a point with respect to any algebraic curve in a similar way.

Figure 2: The dashed circle is centered on the point P and intersects the given circle (solid black) at right angles, i.e., orthogonally, at point T. The squared radius of the orthogonal circle equals the power of P with respect to the given circle.

where s is again the distance from the point P to the center O of the given circle (solid black in Figure 2).

This construction of an orthogonal circle is useful in understanding the radical axis of two circles, and the radical center of three circles. The point T can be constructed—and, thereby, the radius R and the power p found geometrically—by finding the intersection of the given circle with a semicircle (red in Figure 2) centered on the midpoint of O and P and passing through both points. By simple geometry, it can also be shown that the point Q is the inverse of P with respect to the given circle.

The power of a point theorem, due to Jakob Steiner, states that for any line through A intersecting C in points P and Q, the power of the point with respect to the circle is given up to a sign by the product

of the lengths of the segments from A to P and A to Q, with a positive sign if A is outside the circle and a negative sign otherwise: if A is on the circle, the product is zero. In the limiting case, when the line is tangent to the circle, P = Q, and the result is immediate from the Pythagorean theorem.

The common value of these products is the negative of the power of the point A with respect to the circle.

In this case the common value is the same as the power of A with respect to the circle.

The power of a point is a special case of the Darboux product between two circles, which is given by

where A1 and A2 are the centers of the two circles and r1 and r2 are their radii. The power of a point arises in the special case that one of the radii is zero. If the two circles intersect, then their Darboux product is

where φ is the angle of intersection.

Laguerre defined the power of a point P with respect to an algebraic curve of degree n to be the product of the distances from the point to the intersections of a circle through the point with the curve, divided by the nth power of the diameter d. Laguerre showed that this number is independent of the diameter.

In the case when the algebraic curve is a circle this is not quite the same as the power of a point with respect to a circle defined in the rest of this article, but differs from it by a factor of d2.